Games From Your Childhood You Can Still Play

Chinese checkers is characterized by its hexagram-shaped board, which can accommodate up to 6 players. The main goal of Chinese checkers is to move all your marbles from your end to the opposite point of the star. Players can move their marbles by "hopping" over a single adjacent marble – one's own or the opponent's – and can continue to hop until there's no more adjacent marble.

The tangram is a dissection puzzle consisting of seven flat polygons which are put together to form shapes. The objective is to replicate a pattern (given only an outline) generally found in a puzzle book using all seven pieces without overlap. It is reputed to have been invented in China sometime around the late 18th century CE and then carried over to America and Europe by trading ships shortly after.

A string figure is a design formed by manipulating string on, around, and using one's fingers or sometimes between the fingers of multiple people. String figures may also involve the use of the mouth, wrist, and feet. The game ends when one of the two players cannot think of any next solution to the current figure or when one player fails to hold the figure with hands. 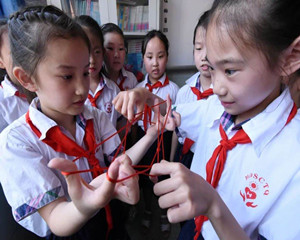 A marble is a small spherical object often made from glass. These balls vary in size. Marbles can be used for a variety of games called marbles. They are often collected, both for nostalgia and for their aesthetic colors. Players often use their fingers to "shoot" one marble to hit the opponent's marble and can acquire it if it was hit.

Hide-and-seek is a popular children's game in which at least two players conceal themselves in a set environment, to be found by one or more seekers.

The shuttlecock is made out of rubber or a plastic disk and attached with many feathers. The player's goal is to keep the shuttlecock in the air while kicking it only using the feet repeatedly.

Hoop rolling is both a sport and a child's game in which a large hoop is rolled along the ground, generally by means of an object wielded by the player. The aim of the game is to keep the hoop upright for long periods of time, or to do various tricks.

Hopscotch is a popular playground game in which players toss a small object into numbered triangles or a pattern of rectangles outlined on the ground and then hop or jump through the spaces and retrieve the object.

Bamboo dragonfly has a helicopter top axis with a cord wound around it, with a horizontal blade sticking out from the axis. A player would pull the cord and release hands; the bamboo dragonfly will take off vertically in the air like a helicopter.

Throwing beanbags is a popular traditional Chinese game for kids in the 80s. These traditional Chinese toys are usually handmade from parents or grandparents. The pitcher will try to hit the opponent with a beanbag; the one that was hit will be eliminated from the game. The opponent who catches the beanbag either will choose to "add a life" or "save a teammate's life" from eliminations.

The Chinese jump rope resembles more of a giant stretched out rubber band. It is a thin piece of elastic rope that is looped around two pairs of legs. The objective of this game is to hook your legs into the rope to form loops and patterns in a certain sequence. This is often accompanied by a rhyme or song. As each level is completed, the rope is moved higher, making the patterns more difficult to complete.

The longer you can keep it spinning, the better. Some tops are spun by means of a string wound around the base. The string is pulled sharply as the top is thrown forward. Players use a rope to lash a top so as to spin it.

Rock paper scissors is a hand game in which players simultaneously form one of three shapes with an outstretched hand. These shapes are "rock" (a closed fist), "paper" (a flat hand), and "scissors" (a fist with the index finger and middle finger extended, forming a V). The rule is illustrated in the picture. Normally, one player wins at the end by beating all players with the right shape.