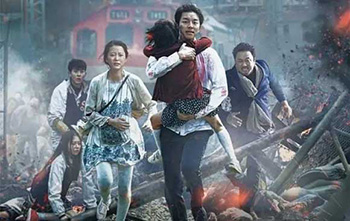 While a zombie-virus breaks out in South Korea, a couple of passengers struggle to survive on the train from Seoul to Busan.

This new Korean film "Train to Busan" is certainly earning a lot of positive word of mouth and box office success since its debut in the Midnight Screenings section of this year's Cannes Film Festival.

The central character is Seok-woo, a man stressed out with problems about his investments business and his porce.

His 9-year old daughter Su-an, feeling neglected, requests her father to bring her to Busan the next day to see her estranged mother.

Seok-woo could not say no.

On the same train to Busan as Seok-woo and Su-an, a lady passenger with a bite wound on her legs, collapses and turns into a zombie.

As she bites another person, that next person would also turn into a zombie and so on.

Panic ensues on the train, and as everyone eventually discover along the way that the same zombie frenzy was true for the rest of the country.

The fight to survive is now on.

This film was one exhilarating roller-coaster ride from beginning to end.

The zombies and their attack scenes were very well-executed target=_blank class=infotextkey>executed with a combination of practical and computer-generated effects.

These monsters were very fast-moving and relentless in their quest for human flesh. We hear people around us gasp and shriek with shock as we see these zombies pile up in droves and hordes, crash out of windows and barrel through doors.

We breathlessly hang on to the edge of our seats the whole ride.

The father-daughter dynamic between Seok-woo and Su-an is front and center. But aside from it, we also meet a cast of supporting characters on the train whose fates we will be following for the rest of the film.

These include a burly man with his pregnant wife, a teenager with his girlfriend and his baseball team, a haughty businessman, two elderly sisters and a homeless man, among others.

We get just enough introduction about who they are for us to care about what happens to them.

He was able to convincingly portray the development of this uncaring apathetic guy into a hero we could all root for to get through this crisis alive.

He was as good in the weepy dramatic scenes as he was in the swashbuckling action scenes.

Kim Su-an is only 10 years old but she had already been acting in films for five years now.

She is the dramatic core of this film as the daughter desperately reaching out to her jaded father.

As a child actress, she held her own impressively among this cast of veterans with her heartfelt portrayal.

Who would have thought that the sad little song she wanted to sing for her father would resonate so much?

Ma Dong-seok is charismatic as Sang-hwa, a devoted husband and selfless fighter.

We see him first as some sort of comic relief only, which made the audience warm up to him.

Later, we would discover how much more his character was able to do and give for others, and loved him more.

Another actor of note is Kim Eui-sung, who was totally hateful in his role as the selfish Yong-suk.

In total contrast to Sang-hwa, Yong- suk was a man only thought of himself alone, not caring that he actually put a lot of other characters directly into harm's way.

People may dismiss as "just" being a zombie film, but it is the drama of human relationships and interactions that rises above the horrific and thrilling carnage.

Director Yeon Sang-ho's first two feature- length films ("The King of Pigs" and "The Fake") were both animated films exploring the bleak side of human nature.

With his first live action directorial effort, Yeon has created a complete film masterpiece with "Train to Busan." Highly recommended!