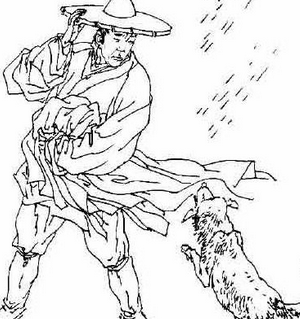 One day, Yang Bu went to the market in a white suit.

On his way it suddenly rained, and he got wet all over.

He took off his white suit, went to a friend's home to borrow a black suit and went home in it.

The minute Yang Bu approached the gate of his house, the big dog he reared couldn't recognize him as its own master.

Taking him for a stranger, it pounced upon him at once, opening its mouth, showing its teeth, and barking furiously.

This made Yang Bu lose his temper.

He cursed: "You beast! Can't you even recognize me?"

While cursing, he picked up a wooden stick and chased the dog to beat it.

When Yang Zhu saw that his brother was going to beat the dog, he hurriedly came out, took hold of Yang Bu and said:

"Alas! How can you blame the dog?

Suppose our dog were a white dog when it went out, but came back black, could you recognize it as our own dog?"