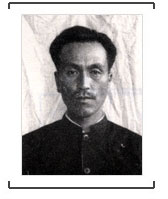 10 May 1941: in a place about 30 kilometers northwest to Nanqiaopu, Jingmen County, Hubei Province, “broke into a civilian house, and when I was demanding a cooking pot from a Chinese people, Lieutenant Tanaka, Commander of the 2nd Platoon, came over and asked, ‘What are you doing?’ I told him, ‘This Chinese said the cooking pot had already been robbed by the Japanese army.’ Tanaka said, ‘He is not obedient. Kill him’”, “so the Chinese was killed by Tanaka”;

Late May 1942: in Guoliuwan, Zhongxiang County, Hubei, “burnt down all the houses of 10 households (30 rooms) of the Chinese people”, and “arrested one Chinese peasant living in the village (aged around 40, male) under the excuse that he was a New Fourth Army soldier suspect. I ordered my subordinate Unit Commander Nakada to extort a confession by bloating his belly with water, and then I killed him with a sword”;

From February to March 1943: on the west side of Yinjia, Xianrenzhai, Dangyang County, Hubei Province, “launched small and medium-sized red-colored canisters (both sneezing gas, of unclear amount) to cause chaos in the Anti-Japanese Army, then used rifles and cannons to beat the righteous resistance and slaughtered 200 soldiers in the whole process”;

Early April 1943: in Tianbaoshan, Yichang County, Hubei Province, “the 8th Company occupied a place and arrested 3 Chinese peasants living there (all around 25 years old). I shot dead 2 of them with a handgun, and ordered Iwasa, a trainee officer of the 7th Company who had also retreated from the frontline, to shoot dead the last peasant with a handgun.” “Later, the 7th Company arrested 2 anti-Japanese soldiers and 8 Chinese peasants living there. I told the four soldiers of the 7th Company who came with me that ‘they are such a burden. Kill them.’ Then, the 10 Chinese were handed over to the Sapper Company under the 2nd Battalion, whose soldiers tied up their hands and feet and threw them into a trench. They were then killed with an explosion”;

Late April 1943: in Yaolingbao, Dangyang County, Hubei Province, “after torturing a Chinese soldier (around 25 years old) who lay on the ground suffering a serious wound on his thigh, I ordered my subordinate Umesaki Kojiro, a first class private, to kill him by shooting his head with a rifle”;

Late October 1943: in Dangyang County, Hubei Province, “I launched 50 medium-sized red-colored canisters (sneezing gas), aiming at Xiongjiapo Village and the hill on the east side of it”, “causing death to more than 100 Chinese residents in about 20 households in the village”;

Mid-November 1943: in Zhijiang County, Hubei Province, “arrested one soldier (around 25 years old, belong to the 13th and 18th divisions) of the Supplies Company of the anti-Japanese forces, tied up his hands and feet, kicked him into the river and drowned him as he still carried a box of mortar shells on his back”;

Mid-November 1943: “in a village about 5 kilometers to the south of Mijitai, Songzi County, Hubei Province”, “interrogated with torture one local Chinese peasant (40 years old) and killed him by bloating his belly with water;

Mid-December 1943: in Renheping, Zhijiang County, Hubei Province, “arrested a local Chinese peasant(around 40 years old), I first thrust a square timber 10 cm thick between his legs and feet and forced him to kneel down while he was being tortured. Later I beat him over his legs and feet with a carrying pole. Finally he died of knee-joint dislocation and broken thigh-bones”;

Evening of 23 December 1943: in Songzi County, Hubei Province, “burnt down a total of 60 rooms of 20 households of the Chinese people”;

March 1944: in Dangyang County, Hubei Province, for “one anti-Japanese intelligence agent suspect (around 40 years old) who was captured and sent there”, “ordered my subordinate Yasuo Hamada to interrogate him while hanging him up by the arms, resulting in broken and prolapsed skins around the first joint of both arms”; “After pulling him out of the guardhouse, the army surgeon Senior Captain Kondo examined him and said, ‘It is too late to cure’. I said, ‘It is too much trouble. You can kill him.” And I left the captive to Kondo, who then used an injector (with a capacity of 100cc) to inject air twice into the vein on the inside of his elbow and killed him”;

April 1944: in Xiongjiapo, Dangyang County, Hubei Province, “under the command of the regiment commander, 5 soldiers (aged 20 to 25, belonging to the 37th Division and the 132nd Division) and 2 intelligence agents for the Anti-Japanese Army (aged around 30), who had been arrested by the battalions in the frontline and imprisoned, were used as live targets in bayonet training for new recruits of the 4th Company and stabbed to death. In this slaughter, I personally killed an intelligence agent”;

10 September 1945: in Siping, Jilin Province, “after the surrender of Japanese imperialists, when we were moving from Siping to the Soviet Union under the supervision of the Soviet Army”, “when ordering the loading of luggage to trucks, to fight back the local Chinese people in their righteous rebellion against the Japanese imperialists, I ordered the soldiers to kill two Chinese people with clubs”.