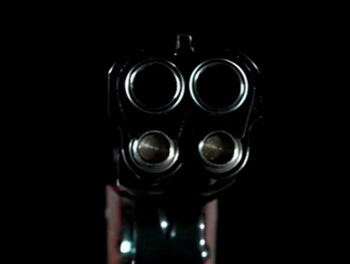 Yang had just been sent back to his former post, Chief of the Provincial Building Material Bureau. Later one afternoon he was walking with Secretary Li, hunting beside the lake where wormwood grew abundantly among scattered reeds. There were seemingly endless green mountain ranges stretching into thin mist, and wild geese silhouetted against the glow of the setting sun. An autumn stream ruffled by the west wind, and the lines of wild geese set against the background of distant mountains embracing the sinking sun, harmoniously merged to enhance the joy of the hunters.

"Quack!” came the cry o# a startled water bird. Bureau Chief Yang took the brand-new hunting gun from Secretary L and caressed it with affection. It was a double-barreled shotgun with a shining blue body and a pair of chilling black muzzles. He had never held such a fine weapon, not even in those days of guerrilla warfare thirty years before.

"Quack! Quack!" Out fluttered into the air several grey-feathered ducks with white necks and yellow webbed feet. The commune hunters stole to the lakeside, their hounds at their heels. Several muzzles at once aimed at the fleeing birds in the air.

"Bang!" Old Yang fired. A wisp of white smoke dispersed to reveal a duck falling from the sky like a stringless kite.

"You've scored a hit! Chief Yang, you did deserve to be called the crackshot in the guerrilla warfare days!" Secretary Li jumped and shouted with joy like a child and rushed to pick up the shot bird.

As they were walking to the waiting black car, Old Yang remarked, “That fellow Wang recommended a fairly good spot to us for hunting.”

Seizing the opportunity, Secretary Li cut in probingly, “He used to be your subordinate, didn't he? This time Ws asked you to grant him 50 tons of building material . . .

"Don't you ever try to talk me into consenting on his behalf. I won't agree, not or any account! A tiny opening will let in a gust of wind. We Party cadres should not engage in any under-the-counter business." Yang stopped to glance over the misty lake where the water joined the sky. "What a nice view! It's a pity that my daughter Ting hasn't come with us, " he concluded.

"There is something nicer in store for her today," Secretary Li smiled with an air of mystery and went on. "Director Wang has managed to get your daughter transferred to the Provincial Drama Troupe with the help of Old Ma of the Cutural Bureau. "

"Really?" Old Yang knitted his brows. Secretary Li pretended not to notice it and got into the car, and with his hand still on the door, murmured as if to himself, "As for this car, it was allocated to you through the effort of Director Wang too. When your wife fell ill, she was rushed to hospital in the same car. "

"Damn it? I have long been aimed at as a target!" Old Yang thought as he subconsciously tightened his gasp on the shotgun. Secretary Li took a swift glance at the gun, and seeming to have been reminded of something, said, "Director Wang knew that you were fond of hunting, so he had this shotgun sent especially to your home. . ."

The engine started. Old Yang was taken aback and couldn't help drawing his breath sharply. The chilling black muzzles glared coldly at him lust like a pair of black eves.