This reading test contains 11 questions. You should spend about 20 minutes on this task.

Read the passage below and answer 11 questions.

Muynak used to be a port city. Inhabitants of Muynak, of which there are fewer and fewer, now pose for pictures next to ships which were once anchored along the shores of the Aral Sea, but are now stranded in an ocean of sand where water once was. These pictures are published in scientific journals and magazines alongside descriptions of how what was once the world’s fourth largest lake may disappear altogether by 2020.

The Aral Sea is located in the central Asian desert between Uzbekistan and Kazakhstan. In 1960, it covered 68,000 km2, and its waters fed agriculture across the region. By 1998, the area of the Aral Sea had shrunk to one third of its previous size and has now become a symbol of how drastically human activities can adversely affect the environment, and how much this effect can, in turn, affect human activities. 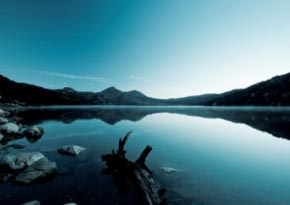 The reason for this change is not exclusively due to man. Droughts in the 1970s and 80s reduced the amount of water carried by the Amu Darya and the Syr Darya, two rivers which feed the sea. However, farming policies implemented during the middle of the 20th century increased the farming of water-hungry crops like cotton, and farmers used vast quantities of water from these two rivers to irrigate their land. The result of this was that very little water was entering the Aral Sea, and it consequently began decreasing in volume.

Policy makers at the time were aware of the effect of diverting so much water for agriculture, but they saw it as an acceptable trade-off to improving agricultural output, and thereby improving the economy. The sea itself was of less importance to the progress of society than farming which could produce not only crops for domestic use but commodities for trade.

They did not, however, anticipate all the effects that the drying of the Aral Sea would have. The Aral Sea is a salt-water sea, and the salt left behind when the waters retreated has now blown away with wind and storms, making patches of land unsuitable for farming. This affects not only the surrounding region, but lands as far as a thousand kilometers away. In addition, the remaining waters have become increasingly more concentrated in salt, and this is killing off a once thriving fishing industry as it kills off the fish themselves. The Aral Sea, like all large bodies of water, has a strong effect on local climate, and as it has disappeared, harvesting seasons have become shorter and dryer. Many farmers in the surrounding area have had to give up growing cotton because the growing season is not long enough for this crop.

The effect on inhabitants of the area is not limited to economics and productivity. The health of those living in the area has deteriorated due to a supply of drinking water which has high concentrations of minerals. The area has seen sharp jumps in the rates of cancer and respiratory illnesses.

There are compelling reasons to halt and try to reverse the fate of the Aral Sea, but it would be difficult. The region, though weakened by worsening conditions, still depends on agriculture to survive, and there are no alternative sources of water. In the 1980s, it was proposed to divert water from rivers far to the north in an effort to save the Aral Sea, and it might have worked had the price of the project, an estimated $250 billion, not been prohibitive.

Choose the correct heading for each section from the list of headings below.

Write the correct number i-x in boxes 1-7 on your answer sheet.

i) Man mostly to blame

iii) A port in a sea of sand

iv) A lost cause

vi) A symbol of environmental disaster

x) The problem of salt

Do the following statements agree with the information given in Reading Passage 1?

On your answer sheet write

TRUE if the statement agrees with the information

FALSE if the statement contradicts the information

NOT GIVEN if there is no information on this

8) The Amu Darya and the Syr Darya were not water sources before the 20th century.

9) The Aral Sea will be saved by diverting water from other rivers.

10) Many farmers have had to stop growing cotton and opt for other crops due to increased salt in the soil.

11) Policy makers were unaware of how much the Aral Sea would shrink due to increased agriculture in the area.