Section A
Directions: In this section,there is a passage with ten blanks. You are required do selected one word for each blank from a list of choices given in a word bank following the passage Read the passage through carefully before making your choices. Each choice in the bank is identified by a letter. Please mark the corresponding letter for each item out Answer Sheet 2 with a single line through the centre. You may out use any of the words in the bank more than once.
Questions 36 to 45 are based on the following passage.
His future subjects have not always treated the Prince of Wales with the respect one might expect. They laughed aloud in 1986 when the heir to the British 36 told a TV reporter that he talked to his plants at his country house, Highgrove, to stimulate their growth. The Prince wasbeing humorous—“My sense of humor will get me into trouble one day,”he said to the aides (随从)—but listening to Charles Windsor can indeed prove stimulating. The royal 37 that been promoting radical ideas for most of his adult life, Some of his 38 which once sounded a hit weird were simply ahead of their time. Now, finally, the world seems to be catching up with him.
Take his views on farming. Prince Charles’ Duchy Home Farm went 39 back to 1996.when most shoppers cared only about the low price tag on suspiciously blemish-free(无瑕疵的)Vegetables and 40 large chickens piled high in supermarkets.
His warnings on climate change proved farsighted, too Charles began 41 action on global warming in 1990 and says he has been worried about the 42 of man on the environmentsince he was a teenager.
Although he has gradually gained international 43 as one of the a world’s leading conservationists, many British people still think of him as an 44 person who talks to plants This year, as it happens, South Korean scientists proved that plants really do 45 to sound. So Charles was ahead of the game there, too. 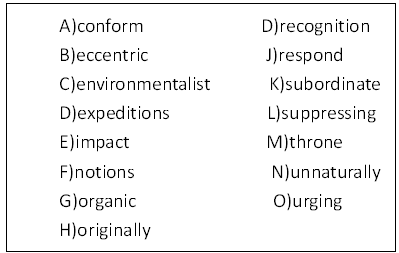