He was replaced by Vice President Teddy Roosevelt, a headstrong populist and avid Trust-Buster who had a much less chummy relationship with America's biggest banker.

Roosevelt wasted no time in using the Sherman Anti-Trust Law to break up the Northern Securities Company in 1902.

Morgan was infuriated – he wasn't going to lose any money, but he had carefully cultivated his reputation as an untouchable financier, and he didn't want the black mark of an anti-trust suit on his resume.

Thus, Morgan waged a drawn-out legal battle with Roosevelt and his government, even though he suspected the law wasn't on his side as soon as the Justice Department had sued him.

Morgan remained angry with Roosevelt for the remainder of his life, but it didn't stop him from helping the federal government when it needed it… again.

During the Panic of 1907, the US economy was once again in dire straits.

Several key banks were on the brink of collapse, so Morgan did what he did best – he leveraged his considerable political power to get as many wealthy friends into one room as he could, then commanded them when, where, and how to spend their money to stop the Panic.

He used his influence to secure otherwise unavailable lines of credit, then bought up tons of devalued stock to inject much-needed capital back into the economy.

He even scored a revenge win over Roosevelt – the story is convoluted, but Morgan was put in a position where he could save the US economy by spending $30 million to purchase stock in a company called Tennessee Coal & Iron, which was a chief competitor of his company, US Steel.

By the letter of the law, the move violated the Sherman Anti-Trust Act, but Roosevelt had no recourse but to allow the purchase. The Panic ended days later.

The Three Bank Legacy Despite his stabilizing efforts during the Panic of 1907, JP Morgan was all but retired.

Fifty years of stocks and steel in imperfect health had left him tired and out of energy.

Understandably, he wanted to enjoy his yachts and his art, so he spent the final years of his life at sea and in leisure, supporting many of the New York artists that he enjoyed, and sailing to new parts of the world.

In 1911, the avid ship lover was excited to take his place on the maiden voyage of the Titanic.

The Titanic was operated by the White Star Line, which was owned by a Morgan corporation, the International Mercantile Marine Company. 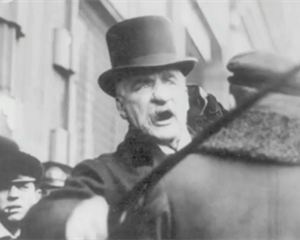 The chain of ownership meant Morgan had his own private suite and promenade deck on the ship.

At the very last minute, though, he decided to cancel his attendance on the maiden voyage due to health reasons, choosing to remain at a resort in the French Alps.

After the ship sank, he remarked, "Monetary losses amount to nothing in life. It is the loss of life that counts."

It's certainly a credible opinion, from a man who appeared to have all the money in the world.

Morgan outlived the Titanic, but not by much.

Morgan's legacy as both a banker and a philanthropist is a powerful one.

His personal estate was worth $68.3 million dollars at the time of his death; in today's money, that would make him a billionaire.

Much of his art was either donated to the Met or preserved in what is now New York's Morgan Library & Museum.

We could probably do an entire video just on Morgan's Art Collection, which was worth tens of millions of dollars, even back then.

As for JP Morgan and Co, his son took over the family business after his death.

The company included Morgan's original business enterprise, as well as his father's London enterprise that Morgan eventually took over after the old man's death.

The London company was restructured shortly before Morgan's death as Morgan, Grenfell, & Co.

It remained tied to its sister companies in the US until the 1980s; it became Deutsche Bank in 1990.

As for the US side of things, JP Morgan & Co was forced to split itself by the Glass-Steagall Act of 1933, which forced banks to separate their commercial and investment elements.

J.P. Morgan & Company stayed on the commercial side, eventually becoming J.P. Morgan Chase at the turn of the 21st century.

The speculative side of J.P. Morgan morphed into Morgan Stanley in 1935.

That means that J.P. Morgan, over the course of 75 years, engineered the creation of three of the 21st century's most prominent banks.

And even that, arguably, wasn't his greatest accomplishment.

His repeated support of troubled banks, failing businesses, and a panicked US government prompted the creation of the US Federal Reserve.

In the aftermath of the Panic of 1907, it was clear that the US government could no longer operate without a federal banking system that could better control the flow of money throughout the economy.

It was too risky to rely on the timely support of a few ultra-wealthy power brokers to resolve recessions; six years later, during the same year that Morgan died, the US created the Federal Reserve.

Despite momentous public backlash, The Federal Reserve was a necessary action.

The United States could never again allow itself to rely on an ultra-wealthy power broker that could single handedly put the economy back together again;

after all, it was unlikely that there would ever be another man like J.P. Morgan.