The acid washing process has its roots in 1960s surf culture. According to CRFashionBook, the trend really took off in the 1980s, after Guess released "the first pair of 'pre-washed' bleach-splattered jeans."

Just the term mom jeans conjures up an image of high-waisted rigid denim jeans with straight (but not tight!) legs. Supposedly, the high waist was meant to cover the tummy and prevent it from spilling over the top of the jeans, creating the dreaded muffin top—but usually, all it did was accentuate any visible fat and make you look frumpy to boot.

According to Emma McClendon, a fashion historian and the author of Denim: Fashion's Frontier, "In the history of jeans as a garment, that high-rise, straight-leg, no-stretch-denim [template] is actually very typical." That basic shape endured into the 1960s. The term mom jeans didn't become popular until 2003 (a.k.a., the era of super stretchy low-rise jeans) thanks to a Saturday Night Live sketch.

These ultra-wide, baggy pants featured briefly in the '90s teen movie Clueless as the signature look for skater guys—which was exactly who they appealed to at first, before they became so popular that they could be found pretty much everywhere. The jeans debuted in 1993 and eventually boasted leg openings up to 50 inches. After becoming incredibly popular in the '90s and then falling out of favor, JNCOs have been revived several times.

The first pairs of ripped jeans probably happened from actual wear and tear, and some have suggested that the trend of ripped jeans originated in the 1970s with punk bands. But eventually, the trend went way off the rails: Jeans with slashes up and down the legs could be bought new, often for exorbitant prices. Sometimes the tears went beyond rips to become full-on holes in the jeans. 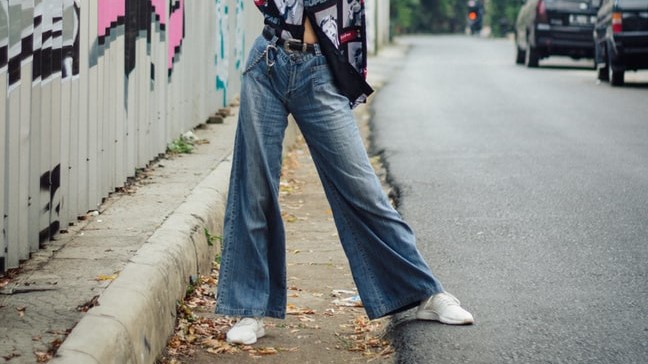 Bellbottoms may date as far back at the 17th or 18th centuries, when they were worn by sailors on American Navy ships (where they were eventually phased out in the years after World War II). Bellbottoms rose to prominence among youth of the 1960s as an act of rebellion.

It's likely that stirrup pants originated in jodhpurs, which were worn during horseback riding; those little pieces of fabric, and later elastic, were added in the 20th century. In the '80s, stirrup pants became a bonafide fashion trend, eventually being made in bright colors and denim.

Denim hot pants are an extreme form of jean shorts where cheek coverage seems to be optional. According to CRFashionBook, the trend began with "short shorts" in the 1950s; then, at the end of the '60s, British designer Mary Quant designed hot pants. They had an inseam of a mere two inches. Hot pants were made from a variety of fabrics, including denim, and were worn by men and women alike.

Originally, according to Max Berlinger at Bloomberg, pleats in pants were "a practical design feature to increase comfort at the hip." The denim version of pleated pants became especially popular in the 1980s. Pleated jeans are making a comeback recently.