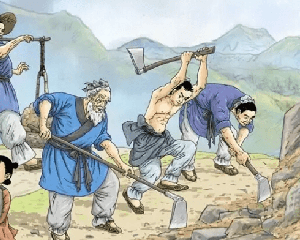 How the Fool Moved Mountains
Taihang and Wangwu Mountains are some seven hundred li around, and hundreds of thousands of feet high.
North of these mountains lived an old man of nearly ninety, who was called the Fool. His house faced these mountains, and he found it very inconvenient to have to make a detour each time he went out and came back; so one day he summoned his family to discuss the matter.
"Suppose we work together to level the mountains?" he suggested. "Then we can open a road southward to the bank of the Han River."
To this they all agreed. Only his wife was dubious.
"You haven't the strength to level even a small hill," she objected. "How can you move these two mountains? Besides, where will you dump all the earth and rocks?"
"We'll dump them in the sea," was the reply.
Then the Fool set out with his son and grandson, the three of them carrying poles. They dug up stones and earth, and carried them in baskets to the sea. A neighbor of theirs named Jing was a widow with a son of seven or eight, and this boy went with them to help them. It took them several months to make one trip.
A man living at the river bend, who was called the Wise Man, laughed at their efforts and did his best to stop them.
"Enough of this folly!" he cried. "How stupid this is! Old and weak as you are, you won't be able to remove even a fraction of the mountains. How can you dispose of so much earth and stones?"
The Fool heaved a long sigh.
"How dull and dense you are!" he said. "You haven't even the sense of the widow's young son. Though I shall die, I shall leave behind me my son, and my son's sons, and so on from generation. Since these mountains can't grow any larger, why should't we be able to level them?"
Then the Wise Man had nothing to say.
Lie Zi