You should spend about 20 minutes on this task.
The graph and table below give information about water use worldwide and water consumption in two different countries.
Summarise the information by selecting and reporting the main features, and make comparisons where relevant.
Write at least 150 words. 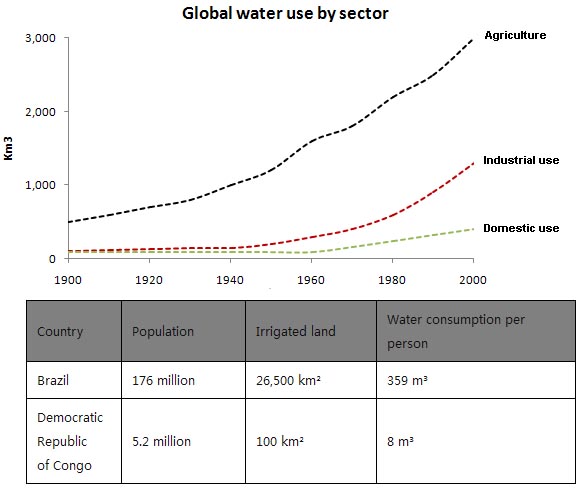 The graph shows how the amount of water used worldwide changed between 1900 and 2000.

Throughout the century, the largest quantity of water was used for agricultural Purposes, and this increased dramatically from about 500 km³to around 3,000 km³in the year 2000. Water used in the industrial and domestic sectors also increased, but consumption was minimal until mid-century. From 1950 onwards, industrial use grew steadily to just over 1,000 km³, while domestic use rose more slowly to only 300 km³, both far below the levels of consumption by agriculture.

The table illustrates the differences in agriculture consumption in some areas of the world by contrasting the amount of irrigated land in Brazil (26,500 km³) with that in the D.R.C. (100 km²). This means that a huge amount of water is used in agriculture in Brazil, and this is reflected in the figures for water consumption per person: 359 m³compared with only 8 m³in the Congo. With a population of 176 million, the figures for Brazil indicate how high agriculture water consumption can be in some countries.