Haiti's President Assassinated at Home
Haitian President Jovenel Moise was assassinated during an attack by gunmen inside his home early Wednesday.
The killing was confirmed by the country's interim prime minister, Claude Joseph, who said the president's wife was wounded in the attack.
"A group of unidentified individuals, some of them speaking Spanish, attacked the private residence of the president of the republic and thus fatally wounded the head of state," Joseph said in a statement.
A state of emergency was declared and the police and military were currently in control of security, he added. Joseph condemned the president's killing as "hateful" and "inhumane." He promised that "democracy and the republic will win."
Haiti has recently experienced an increase in gang violence, anti-government protests and a rise in coronavirus infections.
The streets of Haiti's capital, Port-au-Prince, remained mostly quiet Wednesday morning. But there were reports of people damaging some businesses in one part of the city. Officials closed the country's international airport.
President Moise, who was 53, had been ruling by decree for more than a year. This was after the country failed to hold elections and the opposition demanded that he step down in recent months. 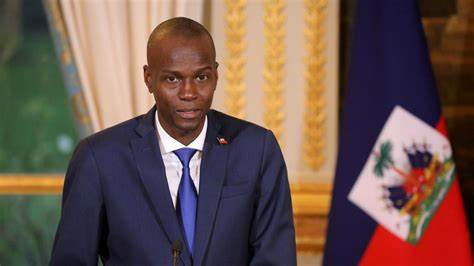 Joseph is likely to lead Haiti for now, said Alex Dupuy, a Haiti-born sociologist who teaches at Wesleyan University in the United States. He told The Associated Press that the best possible situation would be for Joseph and opposition parties to come together and hold elections.
"But, in Haiti, nothing can be taken for granted. It depends how the current balance of forces in Haiti plays out," Dupuy said. Haiti's police force is already dealing with a recent increase in violence in Port-au-Prince that has displaced more than 14,700 people, he added.
Former President Michel Martelly, whom Moise succeeded, said he was praying for first lady Martine Moise. Officials said the 47-year-old first lady was receiving treatment in the hospital.
A person who lives near the president's home told the AP she heard the attack. "I thought there was an earthquake, there was so much shooting," she said. The woman did not want to be named because she said she feared for her life. "The president had problems with many people, but this is not how we expected him to die. This is something I wouldn't wish on any Haitian."
The White House described the attack as "horrific" and "tragic" and said it was still gathering information on what happened.
Moise was killed a day after he nominated Ariel Henry, a neurosurgeon, as Haiti's new prime minister. Joseph took over the job of interim prime minister in April following the resignation of the previous head of government, Joseph Jouthe.
Haiti's economic, political and social problems have recently worsened, with gang violence intensifying in the capital. Inflation also led to food and fuel shortages in a country where 60 percent of the population makes less than $2 a day.
Opposition leaders accused Moise of seeking to increase his power, including by approving a decree that limited the powers of a court that audits government contracts.
The president faced large demonstrations in recent months that turned violent. Opposition leaders and their supporters protested his plans to hold a constitutional referendum with proposals that would strengthen the presidency.
I'm Bryan Lynn.

重点讲解：
1. step down 辞职；下台；让位；
The president need not step down so long as the elections are held under international supervision.
只要选举在国际监督下进行，总统就不用下台~^|GNu[piyG!Uy1k!r.。
2. take sth. for granted 认为…是理所当然的；
I came into adult life clueless about a lot of things that most people ta﻿ke for granted.
我已成年，却对许多大部分人认为理所当然的事情一窍不通O.U6z_)rgvg|hcD%。
3. play out （使）（戏剧性的事件）逐渐发生；（使）展开；
A ridiculous diplomatic ritual will play out once again.
一场荒唐的外交上的例行公事将再次进行taZ@QHC6HW&)WwE。
4. take over 接替；接任；接手；
Prime candidate to take over his job is Margaret Ramsay.
接替他工作的首要人选是玛格丽特·拉姆齐7Ja,zCe%Sb2^O&s,;。