Myanmar's Suu Kyi Appears in Court for First Time Since Arrest
Myanmar's ousted leader Aung San Suu Kyi has made her first in-person court appearance since the government was overthrown by the military. Suu Kyi has been in detention since being arrested by the military during its February 1 takeover.
One of her lawyers, Min Min Soe, told The Associated Press that Suu Kyi was able to meet with her defense team for about 30 minutes before Monday's court hearing in the capital, Naypyitaw.
The lawyers also met with Win Myint, the former president of the government that Suu Kyi served in as state counselor.
Suu Kyi's earlier court appearances were carried out through video link. Before Monday, she was not permitted to meet in﻿﻿﻿ person with any of her lawyers.
The head of her legal team, Khin Maung Zaw, said Suu Kyi appeared to be in good health. She told her lawyers that she has had no access to newspapers during her detention and w﻿as only partly aware of what was happening outside.
The hearing dealt with administrative matters related to six charges Suu Kyi faces. She was first charged with illegally importing communications equipment called walkie-talkies. Military officials used that charge to detain her. She also faces charges of violating coronavirus restrictions and spreading information that could cause public unrest. 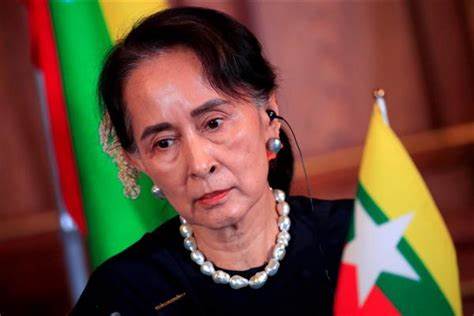 The most serious charge Suu Kyi faces is violating the country's Official Secrets Act, which carries a penalty of up to 14 years in prison. That charge is being dealt with by a separate court.
Suu Kyi's supporters say the charges and court process are politically driven and aim to discredit her and legitimize the military's seizure of power. If found guilty of any charges, she could be banned from running in the next election. The military leadership has promised to hold an election within one or two years of its takeover.
"Suu Kyi is always confident in herself, and she is confident in her cause and confident in the people," Khin Maung Zaw said. He added that the former leader had "wished people good health."
Min Min Soe said Suu Kyi wanted to tell Myanmar's people that her National League for Democracy (NLD) party will stand by them. "Since the NLD was founded for the people, the NLD will exist as long as the people exist," Min Min Soe quoted Suu Kyi as saying. The comments appeared to be aimed at threats by the military government to dissolve the party.
The military has made numerous arrests and used deadly force against individuals protesting the overthrow. Activist groups say nearly 800 people have been killed by security forces in demonstrations across the country. More than 4,000 people have been detained in connection with protests.
I'm Bryan Lynn.

重点讲解：
1. in person 本人；直接；当面；
It was the first time she had seen him in person.
这是她第一次见到他本人y6%2jSPe2,UpS!w(b(。
2. be aware of 知道的；明白的；
We are very much aware of the lack of food supplies.
我们完全了解食物供应的缺乏5UT6c)|,=W9Ua。
3. as long as 只要；
As long as you have your health, nothing else matters.
只要身体健康，其他任何事都无关紧要Fcwe@Lf~mFy。
4. in connection with 关于；与…有关；
He is wanted by the police in connection with the deaths of two people.
他因与两条人命有关而受到警方通缉_ne~JjBjoO。