BBC News. Hello, I'm Tom Watts. Italy is imposing a nationwide lockdown over much of the Christmas and New Year period. It's hoping to prevent a third wave of the coronavirus in Europe's worst affected country. Here's Mark Lowen. The first country in the world to impose a national lockdown in March has tried to avoid a repeat during the second wave opting instead for targeted measures in specific regions. But Italy's infection rate is not coming down quickly enough and the government is worried about Christmas. Between the 24th of December and the 6th of January, restaurants and bars will close. Except for 4 days in that period, most shops too will shut. People can receive a maximum of two others in their homes. The new measures come on top of the closure of ski resorts and quarantine for all arrivals into Italy from Monday until the 6th of January. 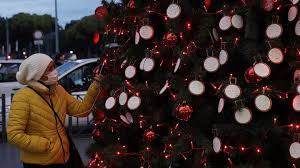 Americans will soon have a second vaccine available to inoculate them against coronavirus after the Food and Drug Administration approved the vaccine developed by Moderna. Distribution of almost 6 million doses is expected this weekend with vaccinations possible as early as Monday. Rural areas are likely to benefit, in particular, because Moderna's vaccine doesn't need to be kept as the ultra cool temperatures required for the Pfizer-BioNtech jab. The US infectious disease expert Anthony Fauci has warned that anti-science and anti-vaccination attitudes could undermine efforts to defeat the pandemic. He said the situation was difficult. The only answer was to be as open and transparent as possible. You have what's almost an instinctual pushing back on things that are so obviously scientifically correct, where you have such divisiveness that people are essentially developing their own set of facts, as opposed to the facts as they exist, and interpreting the fact. It's been very frustrating. Doctor Fauci was speaking after the Vice President Mike Pence was injected with the Pfizer-BioNtech vaccine live on television in an attempt to boost public confidence.

A US Senate report has found officials at Boeing inappropriately coached federal test pilots during a program to recertify the company's 737 Max aircraft. The planes were grounded worldwide in March last year following two deadly crashes. Lebo Diseko reports. In a damning report, senators allege that the FAA and Boeing work together to influence the outcome of tests during the process to re certify the 737 Max plane. The tests took place in July 2019 to see if pilots could react quickly to faulty software implicated in the two deadly crashes. At least one test event was found to have been improperly influenced by Boeing. The findings come just weeks after US regulators cleared the plane to fly once more. In a statement, Boeing said that it takes seriously the committee's findings and will continue to review the report in full. BBC news.

1. But Italy's infection rate is not coming down quickly enough and the government is worried about Christmas.

Interest rates would come down as the recovery gathered pace.

2. Rural areas are likely to benefit, in particular, because Moderna's vaccine doesn't need to be kept as the ultra cool temperatures required for the Pfizer-BioNtech jab.

One player in particular deserves a mention.