French President Emmanuel Macron Tests Positive for COVID-19
French President Emmanuel Macron has tested positive for COVID-19.
His office said in a statement Thursday that Macron took the test as soon as the first signs of the virus appeared late Wednesday. The statement did not provide details on what symptoms Macron had experienced or what treatment he might be receiving.
The 42-year-old president will "self-isolate" for seven days to prevent further spreading. His office added that Macron plans to "continue to work and take care of his activities at a distance."
Other top French officials who were in close contact with Macron, including Prime Minister Jean Castex, were also self-isolating. The president's wife, Brigitte, was doing the same. She tested negative and experienced no symptoms, her office said.
Late last week, Macron joined European Union (EU) leaders at a meeting in Brussels, Belgium, to discuss climate change. There, he held talks with German Chancellor Angela Merkel. The German government said Merkel tested negative after the summit.
During the Brussels gathering, Macron, Merkel, Italian Prime Minister Giuseppe Conte and others were seen talking together inside the meeting room. Television images of the summit showed the leaders wearing face coverings and generally keeping distance from each other.
An EU official told The Associated Press the organization had not been informed about any other leaders or members of their teams testing positive.
More recently, Macron met with European Council President Charles Michel and Spanish Prime Minister Pedro Sanchez. He also held talks with the head of the Organization for Economic Co-operation and Development (OECD), Angel Gurria. He met with Portugal's Prime Minister Antonio Costa on Wednesday.
Sanchez's office said the president would self-isolate until December 24. An EU spokesman said Michel would do the same. Costa's office said the prime minister was also in self-isolation and waiting for test results, but had shown no symptoms.
Macron has canceled all upcoming trips. That includes a December 22 visit to Lebanon, where he has led international efforts to help solve a long-standing political crisis.
News about Macron's infection comes as the country continues to battle COVID-19. France has one of the highest COVID-19 death rates in Western Europe, with nearly 60,000 people killed.
Macron's positive test came just after France eased restrictions that were put in place after a second wave of cases hit the country.
The new rules permit people to go to school and work, but limit travel for most French people. All restaurants, tourist sites and most other public places must remain closed. The recording of over 17,000 new cases on Wednesday alone raised concerns about infection rates as the nation heads into the holiday season.
Macron had planned to appear before the French Senate on Thursday to discuss his government's vaccine plans to fight COVID-19.
French officials have said the country is expected to receive around 1.16 million COVID-19 vaccine doses by the end of this year. A vaccination program for the whole country is planned for the end of spring.
But the French government faces one big problem. A recent public opinion study found that only 53 percent of French people want to be vaccinated. That is among the lowest rates in the world.
Macron is one of several world leaders to test positive for COVID-19. Others included U.S. President Donald Trump, British Prime Minister Boris Johnson and Brazilian President Jair Bolsonaro.
I'm Bryan Lynn.

Worry is a symptom of a deep-rooted fear.
焦虑是一种根深蒂固的恐惧的症状sDU3[DjxsSlreyh~(Kk。

Anyone who wants to avoid the flu should consider getting a vaccination.
任何希望避免患流感的人都应该考虑接种疫苗*%3hx%#,V~。

The patients were observed over a period of several months.
这些病人被观察了数月之久5kE7b;pIq;#Rbi(_8z。

There is no restriction on article length.
文章的字数不加限制am;cDv;ntS5。

5.A recent public opinion study found that only 53 percent of French people want to be vaccinated.

6.His office said in a statement Thursday that Macron took the test as soon as the first signs of the virus appeared late Wednesday.

As soon as the opportunity presented itself, she would get another job.
一有机会，她就会另谋新职;cZm#IWxRV。
As soon as he turned his back, she would make her escape.
他一转身，她就逃跑YD+|Es9Mhw^tT。 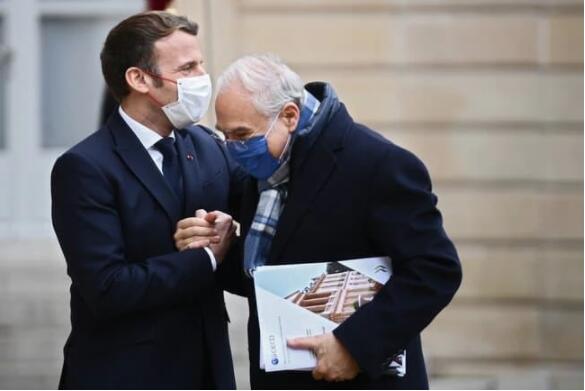