UN: Food Has Run Out for Nearly 100,000 Refugees in Ethiopia
The United Nations says food has now run out for the nearly 100,000 Eritrean refugees in Ethiopia's northern Tigray area.
"The camps will have now run out of food supplies – making hunger...a real danger, a warning we have been issuing since the conflict began nearly a month ago," U.N. spokesman Babar Baloch said in Geneva on Tuesday. He added that the U.N. is worried about attacks and human rights violations at the camps.
It has been a month since Ethiopian Prime Minister Abiy Ahmed announced that fighting had started in Tigray between federal forces and local Tigray forces. Each government says the other is illegitimate after a dispute over holding elections during the coronavirus health crisis.
Communications and transportation links to the six million people who live in the Tigray area have been cut. The U.N. and others have made appeals to deliver food, medicine and other supplies.
Abiy, last year's Nobel Peace Prize winner, has refused to negotiate with Tigray leaders. Just a few days ago, Abiy said his army was victorious, but Tigray soldiers continue to fight. Most Tigray leaders have fled the area and are in hiding.
Under growing international pressure, Ethiopia's government has said it will permit aid to go through a "humanitarian corridor." But the U.N. wants a neutral path to enter the area.
Ethiopia has assisted Eritrean refugees for nearly 20 years, "but now we fear they are caught in the conflict," Baloch said.
In Tigray, the 96,000 Eritrean refugees are in a very difficult position. They live in camps in Ethiopia near the border of their homeland, Eritrea, which they fled. There are reports that some have been attacked or abducted. The U.N. has warned that any such actions would be "violations of international norms."
Eritrea has remained almost silent as the Tigray leaders accuse it of joining the conflict at Ethiopia's request. Abiy's government has denied the accusation.
The U.N. said about two million people in Tigray also need assistance. Before the conflict the number was one million. In addition, one million people have lost their homes, including more than 45,000 Ethiopians who have fled into Sudan as refugees.
I'm Susan Shand.

Many are planning to return to their homeland.
很多人正计划回到自己的祖国去q_^d|hXQE.31e9。

She was deeply pained by the accusation.
这一指控使她极为痛苦e~4cw|eX3J8(R@T40M。

As the curtain rose, the audience fell silent.
幕启时，观众安静下来mJ8.gL.iMdrws8AFDwU。

The refugees are being lodged at an old army base.
难民被安置在一座废弃的军事基地里住宿zjoo]8,=gL%D。

5.The United Nations says food has now run out for the nearly 100,000 Eritrean refugees in Ethiopia's northern Tigray area.

Their luck had simply run out.
他们的好运已经到头了_DqECJ8P[E,。
The water supply for some cities, he fears, may someday run out.
他担心有些城市的供水可能最终会耗尽-DCrdT~x,6o74jmO5ZZ|。

6.In addition, one million people have lost their homes, including more than 45,000 Ethiopians who have fled into Sudan as refugees.

In addition, interest on Treasury issues isn't subject to state and local income taxes.
另外，国债利息不需缴纳政府和地方所得税7AVPIrG3pE|#。
In addition, the respondent disclosed professional confidences to one of the patients.
另外，被告还向其中一位病人透露了行业机密n|Q5uP0SVc_,!|YG+;Mu。 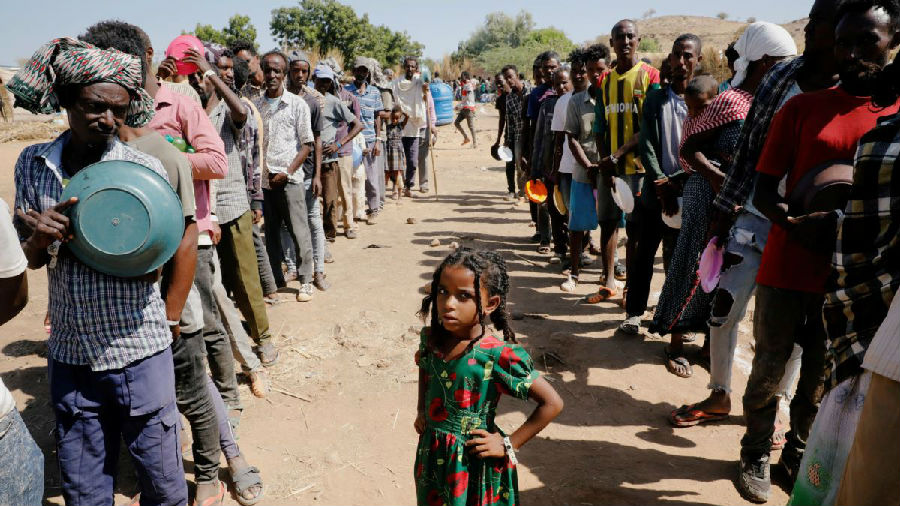