How many more people might President Trump pardon before he leaves office on January 20? There is a long list of people around the president who are accused or convicted of criminal activity, and yesterday, he used his power to pardon one. Former national security adviser Michael Flynn had previously admitted to his crime. NPR justice correspondent Ryan Lucas has covered the ins and outs of this case. Hey there, Ryan.
RYAN LUCAS, BYLINE: Good morning, Steve.
INSKEEP: What did Flynn admit to doing?
LUCAS: Well, Flynn pleaded guilty to lying to the FBI about conversations that he had had with the Russian ambassador in late 2016. Flynn went on to cooperate with special counsel Robert Mueller's Russia investigation and provided a substantial assistance to investigators.
But last year, Flynn changed his legal team, brought on new attorneys and did an abrupt about-face. He started to claim that he was innocent and that he'd been se﻿t up by the FBI. He tried to withdraw his guilty plea, and then things got really weird.
Attorney General William Barr got personally involved. He directed Justice Department attorneys to drop the case, saying that Flynn never should've been prosecuted. Critics accuse the attorney general of doing a political favor for a friend of the president in this case. The presiding judge refused to immediately drop the case against Flynn. That was challenged in court. The judge is still reviewing the case as of today. Now, all of that is moot because the president has gone on and pardoned Flynn.
INSKEEP: Ryan, I want to emphasize what you're saying. The president had already bent the United States Department of Justice to drop the case for his friend, who had pleaded guilty to the crime. The judge suspected corruption in that and did not yet go along, so Trump just pardoned Flynn himself.
LUCAS: Yes, Trump pardoned Flynn. He didn't say why in his tweet, although this was not a surprise. This was a move that was expected. And, of course, we know that the president has for a long time railed against the Russia investigation and against Flynn's prosecution.
The White House put out a statement last night about this pardon. It repeated a lot of the president's views on Flynn. It claimed that Flynn was an innocent man, said that he never should've been prosecuted, also claimed that Flynn was the victim of a plot to try, essentially, to kneecap Trump and his presidency. Of course, those are allegations that President Trump himself has made about the Russia investigation for years. 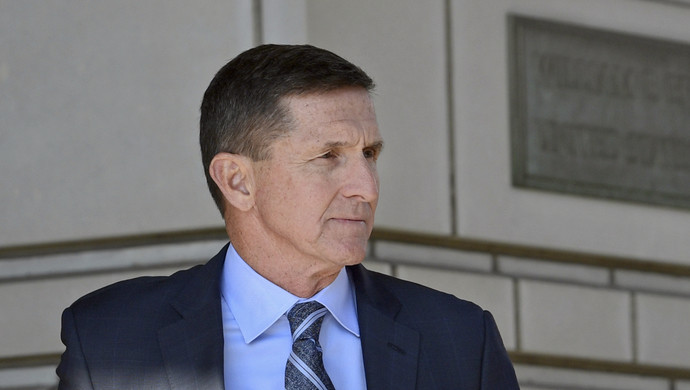 INSKEEP: How are the president's allies responding to the president's use of one of his most awesome powers in a case where he had a personal interest?
LUCAS: Well, it's interesting. The Flynn case and the general here has become a rallying cry of sorts for Trump and his base and his allies on the Hill for quite some time. They welcomed this pardon of Flynn. Republican Senator Lindsey Graham, for example, who, of course, is a good ally of the president, called this a good pardon by the president.
Democrats, on the other hand, look at this as an abuse of the president's pardon power. The Democratic chairman of the House Intelligence Committee, Adam Schiff, said Trump is using the pardon power here to reward his friends and political allies and protect those who cover up for him.
INSKEEP: Can we expect more pardons?
LUCAS: I think we can. I think there's every reason to expect that the president will use his pardon power again before he leaves office. And there's a long list of associates that Trump may decide that he wants to pardon out of a legal jam — his one-time campaign chairman Paul Manafort, for example, who's — who was sentenced to more than seven years in prison. There's also Steve Bannon, his former strategic adviser, who's under federal indictment in New York. And then, of course, there's the possibility that Trump could pardon members of his family or even decide to try to pardon himself.
INSKEEP: NPR justice correspondent Ryan Lucas, thanks so much.
LUCAS: Thank you.

重点讲解：
1. admit to sth./doing sth. （常指不情愿地）承认，供认；
Don't be afraid to admit to your mistakes.
不要怕认错3Iml#|G2~._ied。
2. set up 诬陷，冤枉（某人）；栽赃；
He denied the charges, saying the police had set him up.
他否认那些指控，说警察冤枉他了Ldv[Gw@[L7QEP。
3. rail against （大声）责骂，呵斥；
He railed against hypocrisy and greed.
他痛斥伪善和贪婪的行为N1pbnL=j8;18[。
4. cover up 隐藏，遮掩(事实)；
Irene's cleaning the floor had been a calculated attempt to cover up her crime.
艾琳擦洗地板就是为了蓄意掩盖她的罪行l4G&h_XXoFO[。