Peru to Swear-In New President to Calm Unrest
Peruvian lawmaker Francisco Sagasti is set to be sworn-in as acting president on Tuesday. Peru's congress approved the appointment in an effort to calm street protests after the removal of two presidents during the past week.
Sagasti is a legislator from the Purple Party. He will be sworn-in as president at 2100 hours Universal Time. His term is office would last until July of next year. A new presidential election will be held April 11, 2021.
A week ago, President Martin Vizcarra was removed from office in an impeachment trial. He was replaced by Manuel Merino, who resigned on Sunday after two people died in anti-government protests.
Sagasti spoke to the nation Monday night. He promised to move the country away from anger and "toward a moment of happiness, of hope."
But many in Peru believe its politicians are corrupt and responsible for the economic and public health crises the country is experiencing.
Congress removed the well-liked Vizcarra from office by using a little-known legislative rule. He was accused of taking more than $500,000 dollars in illegal payments while serving as governor in southern Peru from 2011-2014. He denies the charges. Protestors believe he was ousted because of his efforts to stop corruption.
About 50 percent of Peru's legislators are being investigated for financial crimes, The New York Times noted.
The decision to name Sagasti appears to have calmed protestors, but hundreds continued to demonstrate in Lima Monday night.
Sagasti is an engineer and former World Bank official. He said on Monday night that he would consider naming Vizcarra to his cabinet.
"If they are people with experience, integrity and the desire to work, I think we would do wrong to leave them aside," Sagasti told a local television station.
Sagasti will be Peru's fourth president in less than three years after the departures of Vizcarra and Merino. Pedro Pablo Kuczynski resigned in 2018 following corruption charges.
I'm Susan Shand.

I have always regarded him as a man of integrity.
我一直把他看作个正直的男人Hkhn&hw^w=G3FD。

One protestor appeared to be waving a portrait of the British Queen.
一个抗议者挥舞着一幅英国女王的画像yuwwx(K[309QNO15clmA。

Allegations of corruption were levelled at him and his family.
他和他的家人受到了贪污指控m9WbTNe@V%wq^。

5.A week ago, President Martin Vizcarra was removed from office in an impeachment trial.

6.If they are people with experience, integrity and the desire to work, I think we would do wrong to leave them aside.

Let's leave aside questions of minor importance.
咱们把次要问题撇开不谈了吧iVEx-jE5~38LF19m。
We cannot leave aside his neglect of duty.
对他的玩忽职守我们不能听之任之YZI4^4bNuQVG。 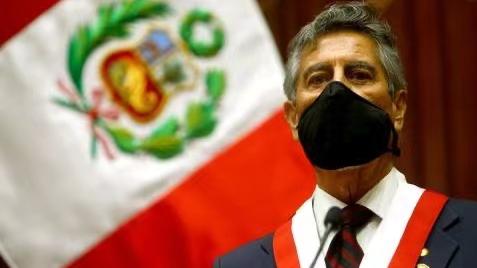