One Officer Charged in Breonna Taylor Case, But Not for Her Death
A Kentucky grand jury on Wednesday charged one of three police officers involved in the shooting death of Breonna Taylor. The 26-year-old Black woman was shot by officers inside her home in Louisville last March.
The officer, Brett Hankison, was not charged for his part in Taylor's death, which happened during a police raid of her apartment on the night of March 13. Instead, the grand jury charged Hankison with three counts of wanton endangerment for firing shots into other nearby apartments during the raid.
Hankison, who is white, has already been dismissed from his job.
No other charges were announced against the other two officers who took part in the raid, Jonathan Mattingly and Myles Cosgrove.
Immediately after the announcement, people expressed anger that the grand jury did not do more.
"Justice has NOT been served," tweeted Linda Sarsour of Until Freedom, a group that has pushed for charges in the case. "Rise UP. All across this country. Everywhere. Rise up for #BreonnaTaylor."
Protesters in Louisville have pressured state Attorney General Daniel Cameron to charge the police officers who shot Taylor. Cameron, a Republican, is Kentucky's first Black state attorney general.
Officers shot Taylor, an emergency medical worker, several times. Police had entered her home using a warrant during a drug investigation. The warrant they used did not require the officers to announce their presence. The use of these so-called no-knock warrants has since been banned in Louisville.
The warrant used to search Taylor's home was connected to a suspect who did not live there and no drugs were found.
Taylor's boyfriend, Kenneth Walker, opened fire when police entered, hitting Officer Mattingly. Walker was charged with attempted murder of a police officer, but lawyers later dropped the charge.
Walker told police he heard knocking but did not know who was coming into the home. He said he fired his gun in self-defense.
Cameron said the state's investigation found that Hankison and the two other officers announced themselves before entering. Cameron said the officers acted in self-defense after Walker fired at them.
Cameron has said his office received materials from the Louisville Police Department's public integrity unit while trying to decide whether to bring state charges against the three officers involved.
Hankison was dismissed from the city's police department on June 23. Acting Louisville Police Chief Robert Schroeder said in a dismissal letter that Hankison had shown "extreme indifference to the value of human life" when he "wantonly and blindly" shot 10 rounds of gunfire into Taylor's apartment.
Last week, the city settled a lawsuit against the three officers brought by Taylor's mother, Tamika Palmer. The city agreed to pay her $12 million and put in place police reforms.
Protesters in Louisville and across the country have demanded justice for Taylor and other Black people killed by police in recent months. The release in late May of an emergency 911 call by Taylor's boyfriend marked the beginning of days of protests in Louisville. The protests were also fueled by the May 25 death of George Floyd, a Black man who died while being arrested by police in Minneapolis, Minnesota.
I'm Ashley Thompson.

They escaped through an emergency exit and called the police.
他们从紧急出口逃脱，并报了警|*Ogz2-II*e|l-O。

He went to Toronto, where he leased an apartment.
他去了多伦多，在那儿租了一间公寓Td6+S+jM9OdoPT!LG。

The police have launched an investigation into the incident.
警方已对该事件展开调查!|xWF|JT_^OHEn。

We've always regarded him as a man of integrity and high professional competence.
我们一直都认为他是个正直而且业务能力很强的人JgtDz|M50[T@Skp53。

5.The city agreed to pay her $12 million and put in place police reforms.

They're offended by the elaborate security measures the police have put in place.
他们被警方部署的繁复安全措施惹怒了BY~yoAr05(Ns。
The restrictions have been put in place, after a five-day national strike.
这项法令是在该国遭受了五天的全国性罢工后颁布的dJ+R.)j4,aW!@;7&。

6.No other charges were announced against the other two officers who took part in the raid, Jonathan Mattingly and Myles Cosgrove. 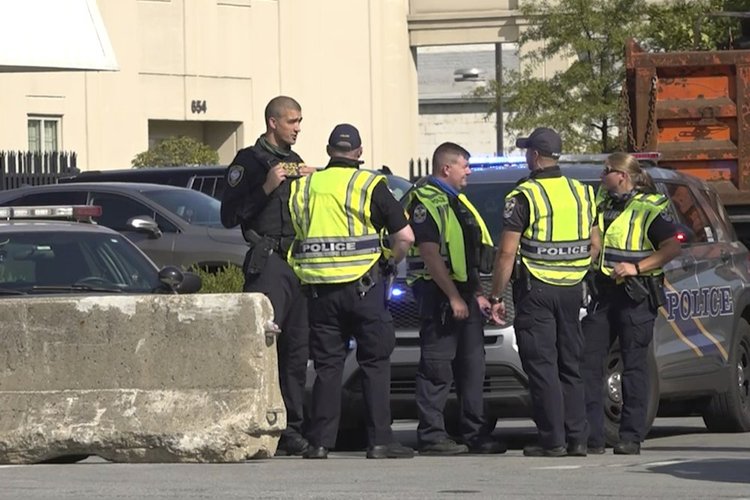