Remains from Mass Grave in Japan Suggest Epidemic in 1800s

Workers have unearthed the remains of more than 1,500 people in western Japan. Archeologists report finding evidence that many of those individuals died of disease, possibly in an epidemic.

The burial ground is thought to date back to the 1850s. It is being dug up for a development project in the city of Osaka.

Officials at Osaka's City Cultural Properties Association have studied the remains. They said many of the individuals were likely in their 30s or small children when they died.

The Umeda Grave is one of seven historical burial grounds in Osaka. It was discovered near a main train station as part of a redevelopment project that began in September 2019.

"It was our first historical discovery of a burial site in Osaka," Hirata said. "The findings will provide details of burial traditions of ordinary people back then."

In the earlier find, many remains showed signs of disease in the hands and feet. The discovery of additional, similar remains suggests the 19th century mass grave was used for victims of an epidemic in the area, Hirata said.

All the remains have been removed from the work area. Experts hope to examine them and other objects to learn more details about the deaths. Some experts have suggested that the epidemic could have involved syphilis, which was widespread during the time in populated areas.

Many of the remains were in small round holes, where bodies appeared to have been buried on top of each other. Researchers found coffins containing more than one skeleton, a sign that many epidemic victims were buried together, Hirata said.

Reuters news agency says researchers discovered about 350 small graves. They also found the remains of animals including four piglets, horses and cats, city officials said. Researchers also unearthed money, Buddhist jewelry and dolls that were believed to have been buried with the dead.

Hirata said experts plan to prepare a report with their findings by the end of next year. The burial ground sits in what used to be a farming area near the city's famous Osaka Castle. It was one of seven major cemeteries in the city.

People used to visit the cemeteries to pray for their ancestors during Japan's mid-summer Bon season under Buddhist tradition.

The bones were disinterred and moved to a burial site.

Work began on establishing the cemeteries as permanent memorials to the fallen.

In keeping with tradition, the Emperor and Empress did not attend the ceremony

She made her way to the kitchen, hoping to find someone preparing dinner.

5.Many of the remains were in small round holes, where bodies appeared to have been buried on top of each other.

They stood on top of the hill, drinking in the beauty of the garden city.

The park lies on top of a coalfield.

6.People used to visit the cemeteries to pray for their ancestors during Japan's mid-summer Bon season under Buddhist tradition.

His statement ended with the words: 'Pray for me.

She went to pray for the soul of her late husband. 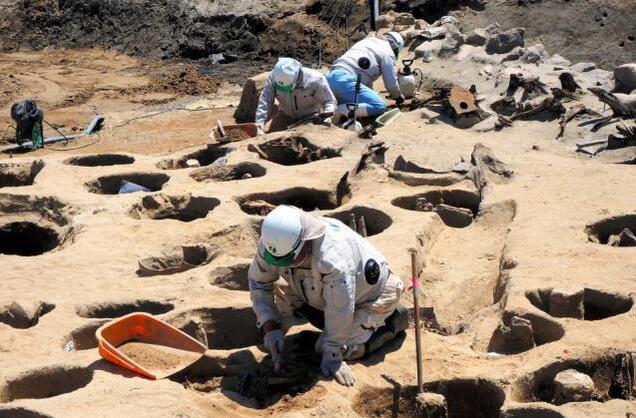