Vietnamese Man Has Not Cut His Hair for 80 Years
Coronavirus safety restrictions have caused many men around the world to grow their hair longer than usual. But none of them compare with Nguyen Van Chien of Vietnam. He claims to have gone almost 80 years without cutting his hair.
The 92-year-old has hair that is around five meters long. His hair looks like a long rope.
Chien believes that what a person is born with should be left untouched. He spoke to a reporter from Reuters news agency.
"I believe if I cut my hair I will die. I dare not to change anything, not even combing it," he said. "I only nurture it, cover it in a scarf to keep it dry and clean and looking nice."
Chien lives in a village about 80 kilometers west of Ho Chi Minh City. As a boy, he had to cut his hair when he was at school. But he left school after third grade. He said he decided never to cut, comb, or wash it again.
"I remembered my hair was black, thick and strong," he said. "I combed it, untangled it to make it smooth. But when I heard the calling from the divine power, I knew immediately that I was chosen."
He added, "I touched my hair and overnight it became really hard. It has attached to my head and became a thing of its own."
Nguyen Van Chien believes in nine powers and seven gods. He follows a very rare religion known as "Dua", or the coconut religion. The name comes from its founder, who claimed he survived only on coconuts. Dua is banned in Vietnam.
Chien's fifth son, Luom, helps him with his hair. He, too, believes in the connection between hair and death. Luom says he has seen a man die after trying to re-attach his hair with string.
"These things look simple but they are sacred," said 62-year-old Luom.
I'm John Russell.

He went off to change a guitar string.
他出去换一根吉他弦S=E^vHW.,E+8+=dz。

He had defiled the sacred name of the Holy Prophet.
他亵渎了这位神圣先知的圣名YPsWNPt9PPwh!。

Religion had an intimate association with alchemy during the Middle Ages.
在中世纪，宗教和炼金术密切相联[WAV8,x8|]14^|hkj=[L。

He was one of the founders of the university's medical faculty.
他是该大学医学院的创建人之一Dg2L^Q,4y-+auPis3。

5.Coronavirus safety restrictions have caused many men around the world to grow their hair longer than usual.

There were television crews and pressmen from all around the world.
来自世界各地的电视工作者和新闻记者齐聚一堂p-rs~nK2HF]0e。
This is, of course, international news and soon it was being flashed around the world.
当然，这是国际性新闻，很快就会传到世界各地pf|b&-fk(0vjYO。

6.But none of them compare with Nguyen Van Chien of Vietnam.

The flowers here do not compare with those at home
这儿的花比不上家乡的花!-]WlkCJ%E8qvgE~。
Few can equal [ compare with] her in manual dexterity.
论手巧，一般人都不如她UWSHQ*@F;dYW!qE。 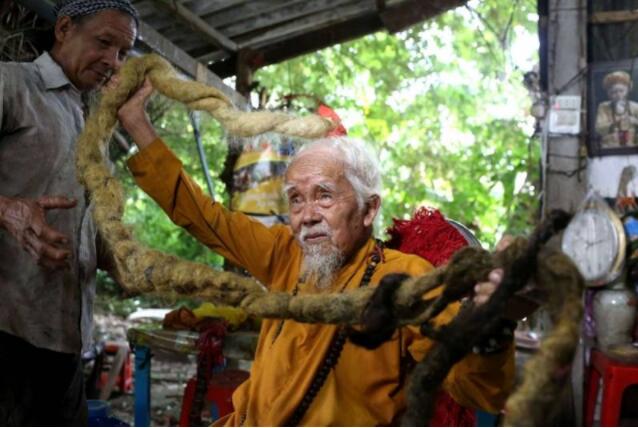