Belarus Removes Theater Director for Supporting Protests
Theater director Pavel Latushko saw detainees come out of prison with bruises. The detainees told him of punishment beatings. Angry, he decided to join demonstrations against the Belarus government he once represented.
Latushko used to work for the government of President Alexander Lukashenko. He held a number of jobs, and formerly served as a foreign ministry spokesman.
Since 2019, Latushko has been the head of the Janka Kupala National Theater, the oldest theater in Minsk, the country's capital. But he was dismissed recently because of his decision to break from the government.
Soon after his removal, the actors at the theater announced their resignations. They decided to stand together with the 47-year-old Latushko.
Large anti-government protests have shaken Belarus since Lukashenko was declared the winner of presidential elections on August 9. The president and his supporters say he won 80 percent of the votes, but protestors say the election was rigged. At least two people were killed and thousands more detained by police in the street violence that followed.
"In the life of every person there comes a line that cannot be crossed," Latushko told Reuters news agency.
He added, "That moment came for me when I saw people coming out of prisons, talking about the violence against them...I considered it my moral duty to express my position."
Latushko was removed from his position as the theater's director after speaking out against the government. Since then the theater has become a flashpoint for the demonstrations.
Red-and-white opposition flags hung from the building this week as hundreds of people gathered nearby with signs critical of the government. Protestors cried "shame" when Culture Minister Yury Bondar arrived to discuss productions for the theater's new season.
Resignation after resignation
Video shared by a local media group showed Bondar inside the theater. The actors shout at him and demand that Latushko be given his job back.
Bondar said the theater should not be turned into a "political club." He added that the government had supported the arts and increased funding since last year. Asked about Latushko, Bondar said that an employer had the right to dismiss an employee.
One after another, the actors left a resignation in front of him and shouted "go away." The protesters outside cheered as the actors left the building after offering their resignations.
For the actors and their supporters, Latushko's dismissal was a sign of the government's suppression of critics after an election that the opposition says was rigged.
Before the vote, police detained opposition leader Sergei Tikhanovsky on charges of inciting violence. His wife Svetlana offered to serve as a candidate for president. Officially, she won just 10 percent of the vote. Following the elections, she fled the country to neighboring Lithuania.
Lukashenko has ruled Belarus since 1994. He says the election was fair and that he will not hold another vote.
I'm Jonathan Evans.

To be fair, the team is young and not yet settled.
说句公道话，这个队还年轻，还没有成型lM;BFV-)3|uO[。

They were impressed by his steadfast good cheer.
他整天笑呵呵的样子给他们留下很深的印象FPrBACW*~N8lN&%Jb7b9。

The servant accepted his dismissal without any complaint.
那仆人毫无怨言地接受解雇R%CH&z]Bp*|=fxw。

Much of the opposition to this plan has come from the media.
该计划的主要反对声音来自媒体akyXrTreE[pL3y0Ui。

5.His wife Svetlana offered to serve as a candidate for president.

The Ambassador said he hoped the statement would serve as a wake-up call to the government.
大使说，他希望这一声明能给政府敲响警钟h539Fs|Cnb)T#.+i。
He volunteered to serve as the manager of our department store.
他自荐当我们商场的经理l_5zw=Z;,d8SwT)AV。

6."One after another, the actors left a resignation in front of him and shouted "go away." 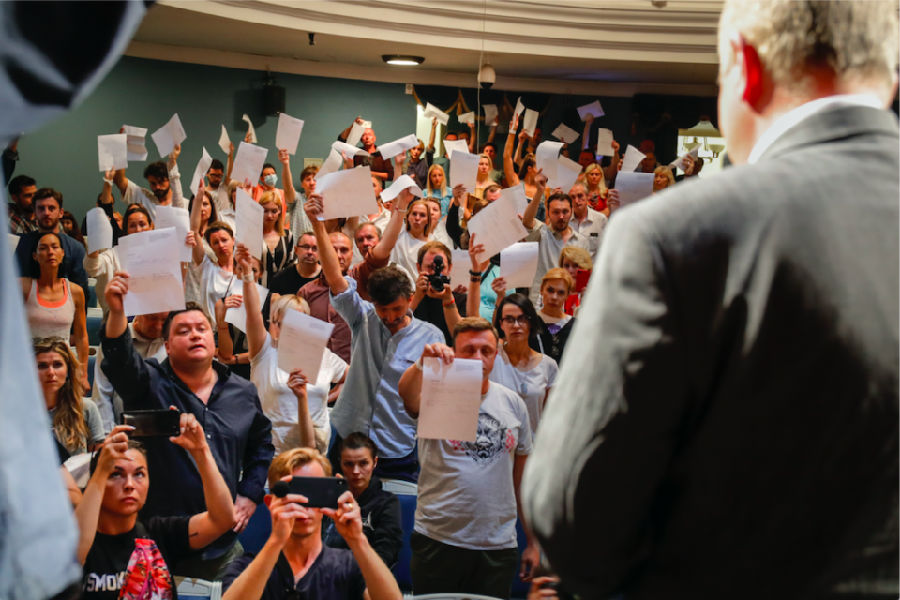