Southwestern Japan Takes Steps to Deal with Flooding, Coronavirus
Boxes of face coverings, bottles filled with anti-bacterial agents and a sign saying "Please wear a mask" mark the entrance to a recreation center in Yatsushiro city.
The building serves as shelter for people who have fled floodwaters in southwestern Japan this week.
Inside the building, pieces of cardboard separate sleeping areas for over 200 men, women, and children. Another sign tells those staying there to take their temperature each morning.
Such measures show the difficulties Japan is facing as it deals with natural disasters in the time of coronavirus.
Japanese officials have been warning local leaders to include coronavirus measures in their disaster preparations. Residents have been urged to seek shelter with friends or family members, if possible, to avoid overcrowding in evacuation centers.
Aiko Ishimura, a 78-year-old retiree, learned from neighbors on Monday about evacuation orders. She lives alone and had planned to shelter at home. But she chose to flee with neighbors.
For Ishimura, spread of the coronavirus is not a top concern.
"We don't have many cases here in the first place. We don't really do the whole mask-wearing thing," she added. However, Ishimura said she keeps a mask in her pocket.
Kumomoto prefecture, where she lives, has had only 49 of Japan's more than 20,000 cases of the disease COVID-19. Those numbers come from the Japanese public broadcaster NHK.
That compares with close to 7,000 in Tokyo, where cases are on the rise again among its 14 million residents.
Misa Matsuda, a 48-year-old medical worker, knows well about the yearly floods in the area. She also had planned to remain at home. But she got a big surprise Monday when she opened her door. She found river water flowing just a few meters from her home.
"I thought, there's no way the water would come up here to our house, where it's a bit of a hill," she said.
Extreme weather disasters have become increasingly common in Japan recently. Last year, Typhoon Hagibis killed nearly 100 people. That storm struck a year after more than 200 died in western Japan in the worst flooding in many years.
Matsuda said she was not too concerned about the new coronavirus because basic safety measures were being taken. But she did worry that residents would gather in the shelter to talk, creating the sort of crowded conditions officials say increase infection risk.
City official Takanobu Ono said the evacuation center was limited to 300 people. It can hold up to 500 people.
"Some of (the residents) have just been saved by the skin of their teeth," he said. "The reality is that coronavirus is less of a concern for them...So we're taking the measures we have to but we haven't been so strict about it."
Close to 60 people have died from floods and landslides caused by heavy rains across the area since Saturday.
I'm Ashley Thompson.

Landslides have cut off many villages in remote areas.
滑坡使边远地区的许多村庄与外界隔绝XEfcy)IK85eOo-(Qd!#。

5."Some of (the residents) have just been saved by the skin of their teeth," he said.

by the skin of one's teeth 侥幸

6.Such measures show the difficulties Japan is facing as it deals with natural disasters in the time of coronavirus.

She saw a psychiatrist who used hypnotism to help her deal with her fear.
她去看了一位用催眠术帮她克服恐惧感的精神科医生!Ad)x,^%VYCYF6vL。
He's a hard man to deal with.
要跟他这个人做生意很难)Cvddgwaghq;。 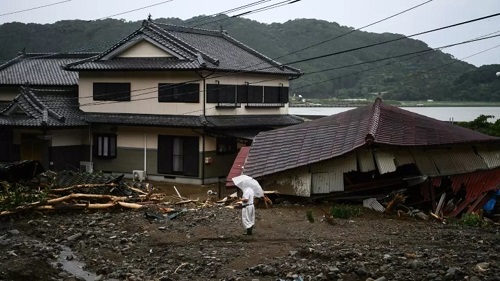