Europe Faces Difficult Issues as Germany Becomes EU President
Europe faces big economic, trade and public health issues as Germany takes over the presidency of the Council of the European Union.
The EU's most powerful member became president of the Council on July 1. It will head the 27-member political and economic bloc for the next six months.
As the EU's president, German officials will be dealing with the COVID-19 health crisis and the economic damage it has caused in Europe. Other issues include the effects of Britain's withdrawal from the EU, the bloc's trade with China and tensions with the United States.
Germany's return to the presidency comes as its leader, Chancellor Angela Merkel, is expected to leave office next year. With her country taking control of the EU presidency, she will need to persuade European leaders to compromise.
One of the first issues facing the bloc is settling differences on an $843 billion spending plan aimed at speeding up Europe's economic recovery. EU members also need to reach agreement on a multi-year budget, which is expected to cost more than $1 trillion.
On Monday, Merkel said she hoped the 27-member bloc would agree to a deal on the budget and additional spending later this month. She spoke at talks with French President Emmanuel Macron when they met in Germany.
The German presidency comes as Merkel is riding a crest of popularity. Part of the reason is what some people see as her success dealing with the pandemic.
Another reason might be her decision to work with France to push for a large coronavirus recovery spending measure. The goal is to help European countries, which have struggled economically because of restrictions aimed at limiting the spread of the virus. Usually, Germany is considered one of the EU's more frugal members and opposes new spending.
In addition, the EU and Britain have intensified negotiations aiming to define their relationship after Britain's withdrawal from the bloc. Among the issues are rules governing trade between the two sides. The British government is hoping to reach an agreement soon.
John Springford is deputy director of the Centre for European Reform, a research group in London. Springford said he believes that the interests of Germany and France are closely linked and have helped Europe.
"...There's a realization that she wants to have been a chancellor that has made Europe stronger," he noted.
Sebastien Maillard is head of the Jacques Delors Institute in Paris. He believes that Merkel is thinking about her legacy and is taking steps to make this EU presidency more meaningful.
‘It's really a time for her to make history, so this presidency surely will make a difference compared to previous ones," he said.
But making a difference will not to be easy. The Reuters news agency reports that Germany wants fairer trade relations with China. European companies say China does not give them the same ability to sell products in its markets as Chinese businesses have in Europe.
Tensions between the EU and the United States have grown during the presidency of Donald Trump. The U.S. military plans to withdraw thousands of troops from Germany.
Maillard noted, however, that Germany and the U.S. continue to have a close relationship.
"...We share many common values, and there is much for both economies to share together," he said. He added that the U.S. should treat the EU as a whole and not as a divided group.
But observers like Daniel Gros wonder how much Germany can do as a European Council president. Gros directs the Center for European Policy Studies in Brussels.
"The presidency of a big country cannot achieve a lot. Because if it tries to push its own priorities, the other countries will react..." he said.
I'm Mario Ritter, Jr.

Political observers believe that a new cabinet may be formed shortly.
政治观察家认为新内阁可能很快就会组建ZE)z1RaEfnT5c_rEoae^。

They submitted their reports to the Chancellor yesterday
他们昨天向财政大臣递交了报告0][@=4VnH.yW^3X[。

He was already preparing his run for the presidency.
他已经开始为参选总统做准备了j%iE7sT0,XKNzdX。

5.Maillard noted, however, that Germany and the U.S. continue to have a close relationship.

have a close relationship 关系密切

6.Germany's return to the presidency comes as its leader, Chancellor Angela Merkel, is expected to leave office next year.

I think before you leave office you will see a change of guards here in the Middle East.
我认为在你离任前，你会看到中东安全局势的改变8@zp!@s!*mkc1=|^.z。
What he did not say was that he would immediately leave office.
然而他没有提到的是他会立刻下台3PlSl+2hQ]AA.j[o1S。 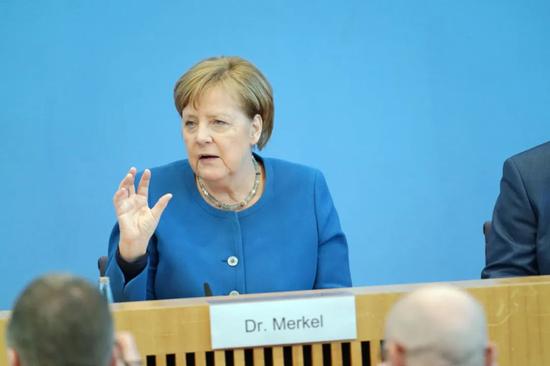