Americans Buy Used Cars in the Coronavirus Economy
In April, as America shutdown to stop the spread of the new coronavirus, used-car salesman Alex Tovstanovsky bought as many cars as he could find. His business in the Illinois town of Naperville was filled with used vehicles, cars that are no longer new and up for resale.
The price of these cars had fallen to the lowest levels he had ever seen. He believed the market for used cars was about to grow a lot – and he was correct.
Now, as Americans return to work, car buyers are mostly looking at used cars. With his large number of cars, Tovstanovsky can offer lower prices than his competitors. His sales are up 38 percent when compared to May 2019.
Growing demand has now pushed used car prices about 20 percent higher than they were when Tovstanovsky began buying in April.
"I just wish I'd bought more cars when prices were low," he said.
American economic activity has fallen very sharply because of restrictions meant to control the spread of the coronavirus. Americans do not want to spend money on things like new cars. Instead, they are trying to save money by buying used cars, often less than 60 percent the cost of a new one.
Used car dealers are now trying to buy as many used vehicles as they can, although the economy still looks shaky.
"We don't have enough inventory," said George Arison. He is co-chief executive officer of online used-car seller Shift. By the end of April, Shift's sales returned to levels the company had seen before the coronavirus arrived in the United States.
Americans usually choose used cars in difficult times. Cars are important in a country where in most places it can be difficult to get to work without a vehicle.
But growing used car sales are a problem for the big automakers. They want people to buy new cars. They need to sell those cars to get the money they lost when sales stopped during the two-month shut down for coronavirus.
According to Cox Automotive, new car sales for the week ending May 28 were down 28 percent, but sales of used cars rose 6 percent. The prices of used cars also rose 5.7 percent in the beginning of May, reported Cox Unite Manheim.
The company Carmax Inc. is the country's No. 1 seller of used vehicles. It has asked nearly 60 percent of its 15,500 employees to return to work.
Its chief marketing officer Jim Lyski said he believes the company will become stronger as used car sales increase in the months ahead.
Right now, used car salesmen say their companies and buyers are finding it easy to get loans for used cars. However, one major bank, Wells Fargo & Co, said this week it will stop offering loans to many used car companies because of economic uncertainty.
Used-car dealers say recent buyers have included those who recently received a government check for $1,200. The government issued these checks to most Americans to help the economy.
"I've seen a lot of down payments this month of exactly $1,200," said Scott Allen. He is the owner of Auto Land in Fort Worth, Texas, which sells older used vehicles. After being closed for nearly a month from March 23, Allen's sales in May were up 55 percent over his usual sales for that month.
But both the new and used car industry is worried about the future. Many Americans lease vehicles for two years and then return a nearly-new car. More than 4 million are due to be returned to the market this year, nearly 340,000 each month. These cars could flood the market and force prices down.
I'm Susan Shand.

Such loans often are used for weddings, car purchases, small businesses and down payments on apartments.
这类贷款常用于婚礼、购车、小企业以及房贷的首付等vf[-]N~@BRb9)g。

5.His business in the Illinois town of Naperville was filled with used vehicles, cars that are no longer new and up for resale.

She no longer feared that they should misunderstand her.
她不再害怕他们会误解她了Ybd+38^P*N8FZgv=G3。
They no longer had him as a friend.
他们再也不把他看成朋友了U@QE3Me&;&LZKW_EZ.q。

6.His business in the Illinois town of Naperville was filled with used vehicles, cars that are no longer new and up for resale. 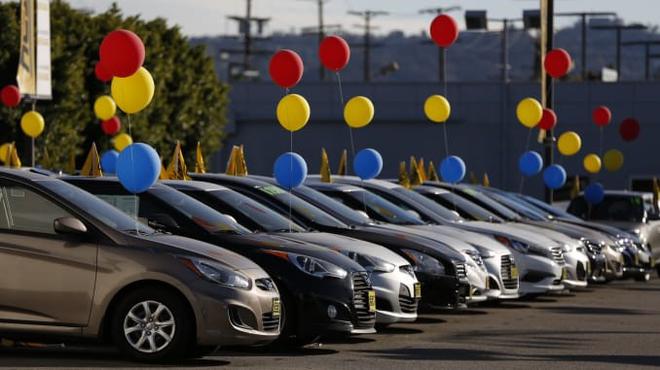