Coronavirus Misinformation Presents Problems for Tech Companies
Companies in Silicon Valley, California, America's technology capital, recently hurried to remove a misleading video from their websites. The video was of a discredited researcher sharing several questionable or false theories about the new coronavirus, including that it was part of a plot by powerful people.
However, internet companies could not take the video down quickly enough. Millions of people watched and reposted the 26-minute video called Plandemic, over several days. And it gained a huge following in Facebook groups that oppose vaccines or are protesting state leaders' stay-at-home orders.
The spread of Plandemic demonstrates how easy it is to use social media to quickly share possibly problematic material to lots of people. It also shows how difficult it is for platforms to stop that spread.
Anti-vaccine activist Judy Mikovits created the video, in which she makes several unsupported claims. She tells her audience that the virus was manufactured in a laboratory, and that medical workers inject it into people through influenza vaccinations. She also claimed that wearing face protection could lead to a coronavirus infection. These ideas helped strengthen and grow a social media army distrustful of the virus's threat.
There are still many unanswered questions about the virus, which has changed everyone's lives. This has led many to distrust officials dealing with the crisis. People shared the video again and again on YouTube, Facebook and Instagram. The video continues to spread even after the companies removed it from their sites.
One poster on a private Facebook group called Reopen California wrote, "The other video has already been deleted by YouTube. ... Let's get it to another million! Modern day book burning at its finest."
Ari Lightman is a professor of digital media at Carnegie Mellon University in Pittsburgh, Pennsylvania. He spoke to The Associated Press about the video.
"Once it is available, it has an infinite lifespan," he said.
In just a few days, two of Mikovits' books became best-sellers on Amazon. Conservative radio talk shows and podcasts began playing the audio from Plandemic. She also appeared on politically extreme, internet shows to talk about the video.
Mikovits did not answer The Associated Press' request for comment.
Ten years ago, Mikovits tried to spread a false theory that a virus known as XMRV in mice causes the condition called chronic fatigue syndrome.
Efforts by social media platforms to delete and ban Plandemic have led to the spread of other questionable claims, including that tech companies try to hide truths about the coronavirus.
Facebook said it is removing full copies of the video that include Mikovits' suggestion that face masks can make a person sick. The company said that claim could "lead to imminent harm." YouTube and Vimeo both said the video violated their rules on harmful misinformation. Twitter said it had limited the spread of the video on its platform.
I'm Pete Musto.

Yet the imminent crisis in its balance of payments may be the President's nemesis.
不过迫近的国际收支平衡危机也许是对总统的报应2Hk@~ladFv6Ea。

The train was about to leave and I was not even on the platform.
火车就快开了，可我还没到站台,P|@!w1LxaL2。

The guards were removing a section of fencing to let it through.
警卫在拆除一段围栏好让它通过Lkr[m(a5Pvf@]L(。

The book is one of his best-sellers.
这本书是他的畅销书之一V6uq2d9yeT^ok&。

5.In just a few days, two of Mikovits' books became best-sellers on Amazon.

In just a few days 仅几天

6.However, internet companies could not take the video down quickly enough.

Gil rose and went to his bookcase and took down a volume.
吉尔站起身，走到书架跟前，取下一本书G!+IPsf(=P,a-E1o。
I took down his comments in shorthand.
我用速记法把他的评论记录了下来hUzGESFaeZNH%e。 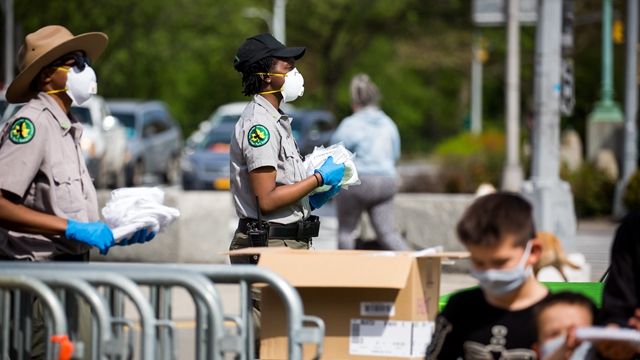