A new public opinion study says that 73 percent of Americans support an amendment to the U.S. Constitution that guarantees equal rights regardless of sex. The Associated Press-NORC Center for Public Affairs Research released the results of the study Monday. It comes not long after the state of Virginia's legislature unexpectedly passed the Equal Rights Amendment, known as the ERA for short, in January. The ERA says that equal rights cannot be denied or decreased because of gender. When Virginia passed the amendment, it became the 38th state to do so. The approval meant that three-fourths of states had approved the amendment – the amount required by the Constitution. The U.S. Congress passed the measure in 1972.

However, Congress set a 1977 deadline for the amendment. Later, it was extended to 1982. Of the 38 states needed, 35 had approved the change in the early 1970s. Three states approved it in the 21st century – long after the deadline had passed. Also, five states have cancelled their approval of the measure. The new poll did find that there is a difference between Democratic Party and Republican Party support for the measure. But, majorities of both parties support it. Nearly nine out of 10 Democrats and about six out of 10 Republicans, said they supported the measure.

LaVonne Hirashima had two children by the time she was 20 and was not able to go to a university. She worked hard and built a career in information technology, an industry that is mostly male. She works for the United States government. Hirashima believes she did not receive better jobs or higher pay because she is not a man. The experience led to her strong support for the ratification of ERA. "I can express an idea or make suggestions, but it's still not taken (seriously)," said Hirashima. She lives in Albuquerque, New Mexico. "As more women come into management I think it will change, but it's hard. It's hard to change that culture." The Associated Press-NORC said that 46 percent of Americans agree with the belief that women have more difficulty than men getting high-paying jobs. Gerald Havens disagreed. The retired civil service employee said the amendment is no longer needed. He said his wife, daughter, his sister and other women in his family, earn just as much money as men. "I think society has moved on from when it was introduced in the 1970s," said Havens, a Republican.

The study said about 50 percent of Americans think ratifying the ERA would improve the country, while 40 percent think it would not change very much. About 10 percent say it would hurt the country.

Frances Wiener, 70, said she was very involved with the ERA campaign when it first began. She is a 70-year-old scientist who lives in New York City. She chose to work in laboratories all her life. She does not have a family. She believes women face less discrimination now than they did 50 years ago. The study said that 70 percent of Americans agree with that idea. Still, Wiener hopes the ERA will finally pass. "Sometimes, when things are written in stone, it makes people think a little bit harder about doing certain things," she said.

Regardless of whether he is right or wrong, we have to abide by his decisions.

It is mainly because of my fault.

In a few cases the benefits can be extended to two year.

The order is no longer effective.

5.but it's still not taken (seriously),

That's why we have to take image seriously.

It is undoubtedly true that students should take their studies seriously.

6.she was very involved with the ERA campaign when it first began.

I don't want my son to be involved with criminals.

It's about the most exciting thing you can be involved with. 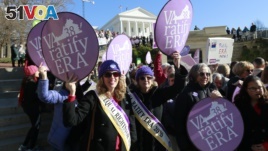