US Aims to Begin Withdrawal from Afghanistan within 10 Days

The United States military has announced plans to withdraw troops from Afghanistan,adding it is unlikely that violence there will completely disappear. U.S. Secretary of Defense Mark Esper spoke Monday about an agreement between the United States and the Taliban in Afghanistan. He told reporters that under the deal, U.S. forces will begin withdrawing from the country within 10 days. U.S. and Taliban representatives signed the deal on Saturday in Doha, Qatar. It is aimed at starting negotiations between the Taliban and the Afghan government and ending 18 years of fighting. Under the deal, the United States agreed to reduce the number of its troops in the country to 8,600 from 13,000 within 135 days. It also promised to work with U.S. allies to reduce their troop numbers over that period.

The United States and the Taliban promised to work toward the release of military combat and political prisoners as a measure to build confidence. The agreement calls for about 5,000 Taliban prisoners to be released in exchange for up to 1,000 Afghan government captives by March 10. In return, the Taliban has promised to enter into talks with the Afghan government and to honor security guarantees and a ceasefire. But a Taliban representative says his group will not take part in talks with the government until it releases the Taliban fighters. Afghan President Ashraf Ghani has rejected that condition. Ghani was not involved in the negotiations between the Taliban and the U.S. government.

A spokesman for the militant group, Zabihullah Mujahid, said the Taliban was ready for the talks, but waiting for the release of the 5,000 prisoners. "If our 5,000 – 100 or 200 more or less does not matter – do not get released, there will be no intra-Afghan talks," he told the Reuters news agency. U.S. officials have said they hope negotiations toward a permanent political settlement and ceasefire can start in soon. Ghani said on Sunday that U.S. President Donald Trump had not asked for the release of the prisoners. He added that their release should be discussed as part of a comprehensive peace deal. The Taliban spokesman, Zabihullah, said that U.S. forces had captured most of the prisoners on the list of 5,000.

He said they were being held in Afghan government prisons and that the sick and older prisoners should be freed first. Zabihullah added that a seven-day deal on reducing violence had come to an end. He said, "We are receiving reports that people are enjoying the reduction in violence, we don't want to spoil their happiness." But he added that the current calm does not mean that the Taliban is unwilling to restart its militant activities. On Monday, Afghan officials reported that three civilians were killed and 11 were injured in an explosion in the eastern city of Khost. No group has claimed responsibility for the violence.

Fighting in Afghanistan has lasted for more than 18 years. It started when U.S.-led forces ousted the Taliban from power after U.S. officials found that the group had sheltered al-Qaida leader Osama Bin Laden and his followers. Bin Laden plotted the 2001 terrorist attacks on the United States. In recent years, the Taliban has controlled or attacked more territory across the country, but has been unable to hold major Afghan cities. The joint statement said a full withdrawal of all U.S. and coalition forces would take place within 14 months. The withdrawal depends on the security guarantees made by the Taliban.

After all, it's unlikely that everyone is wrong.

He aims at mastering English.

Parents should be those who help their children build their confidence.

I stand infront of the house, waiting for my mom.

5.but has been unable to hold major Afghan cities.

be unable to do 不能去做

I'm not able to answer this question.

He was so annoyed as to be unable to do what he wanted to.

6.It also promised to work with U.S. allies to reduce their troop numbers over that period.

Don't worry. I promise to do just as you say.

I promise to do all these things. 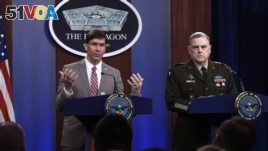