Cameroon Urges Women to Vote
Community groups, political parties and the government in Cameroon have been appealing to women to vote in elections on Sunday. They are telling the women not to fear threats made by separatist groups. The separatists claim they will stop the local and parliamentary elections.
Female candidates and women who campaigned for other candidates fear their efforts may lead to nothing at all if women do not come out to vote.
Representatives of non-governmental organizations and government ministries joined political parties at campaign events in the capital city, Yaounde. They say they did this as part of a special campaign for women to perform their civic duties.
Alvine Yinda is a candidate of the Cameroon People Democratic Movement. She told VOA she likes the appeal to women because if they fail to vote on Election Day, men hold an unfair advantage.
Yinda said that her party's female candidates decided to urge all women who are registered to come out to vote on February 9. She says they are working with all the political parties to make sure women take part in the decision-making process.
Mumah Bih Yvonne is national coordinator of the non-governmental organization Cameroon Women's Peace Movement. She says its goal is for women to support lists that have a majority of female candidates.
"Women have a different way of looking at governance. But if we are not there to influence policies, how do we get that level playing ground that we (women) are looking for," she asked.
Women historically underrepresented
The president of Cameroon, Paul Biya, called the elections last November. Before then, groups of women led by the NGO More Women in Politics visited towns and villages asking women to compete for political office.
Traditionally, many women do not vote because their husband or their communities limit their participation. Some women fail to vote because they are unable to read or write.
This year, some observers fear the number of female voters will decrease because of a separatist conflict in Cameroon's Northwest and Southwest. Armed groups are fighting to separate English-speaking areas from the French-speaking majority country. At least 3,000 have died in the fighting.
Most voters in the Northwest and Southwest have moved to safer areas. The election commission says it has taken special measures to make sure they can vote on Sunday.
Within the past week, two political parties reported that the separatists attacked four campaign teams and kidnapped at least 20 people.
More than 40 percent of Cameroon's nearly nine million voters are female. Women make up about 52 percent of the population.
But just 31 percent of the 180 lawmakers at the National Assembly and 21 percent of the senators are women.
I'm Susan Shand.

She spent too much time making herself up.
她在化妆上花去了太多时间9TiMEu5ty)eh31)&b。

Whatever you are writing make sure you are clear, concise, and accurate.
无论写什么，一定要清晰、简练、准确*Mcx5)^60lYh;。

He's been away for at least a week.
他走了总有一个星期吧[gzvLDZ.t+hv+8i6u6R。

Time and again political parties have failed to tackle this issue.
各个政党处理这个问题时都屡屡失败CWwo!FJGWHsNY@.。

5.She says they are working with all the political parties to make sure women take part in the decision-making process.

6.The election commission says it has taken special measures to make sure they can vote on Sunday.

It is urgent that government and experts take measures to solve these problems.
迫切需要政府和专家采取措施解决这些问题BYfXDEsb2tYPMvN[V0S。
We must take measures to control it.
我们必须采取些措施来控制空气污染3XHzs*KEGpv;4LVH6。 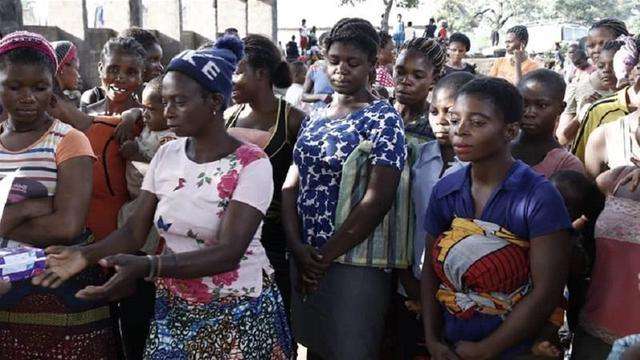