Will New Rules Save Lives on Mount Everest?
Experienced climbers of Mount Everest are wondering if new proposed rules will deal with the root causes of deaths on the world's tallest mountain.
The proposals, if approved by the government of Nepal, would add steps to the permitting process for climbers.
American mountaineers Ed Viesturs and Alan Arnette said the measures are unlikely to stop inexperienced climbers from trying to travel up Mount Everest.
This year, eleven climbers died while trying to climb the 8,850-meter high mountain. Many of them died in late May after they were stuck in a "traffic jam" near its summit.
Viesturs told the Reuters news agency that many teams tried to reach the summit as soon as they heard predictions of good weather.
"Everyone is afraid of missing what might be the one and only perfect day. There are typically several good summit days, but there's pressure to go when everyone else goes," he said.
Traditionally, Nepal has given climbing permits to anyone prepared to pay a fee of $11,000. This year, the government approved a record 381 permits. With essential Sherpas and guides added, more than 800 people were trying to reach the summit during the short weather window.
The overcrowding led to deadly delays in what is known as the "death zone," the area above 8,000 meters. It also raised concerns that guide companies were urging inexperienced mountaineers to attempt the climb.
Among the suggested changes is a rule for climbers to have a certified doctor prepare a report on their medical history and general health. Another suggested requirement is that climbers provide evidence they have climbed another tall mountain in Nepal.
The proposals have been offered to the cabinet for approval, said Mira Acharya, who oversees climbing activities for Nepal's Department of Tourism. The government has yet to say when the laws might take effect.
Viesturs said the proposed changes will not do enough to stop the "group think" mentality that led to the traffic jam in late May. He said climb leaders at base camp also needed to consider how to fix the problem.
"I know several climbers who waited until later and had the mountain almost to themselves," Viesturs said of the 2019 climbing season. "We really need to answer why so many people are on the summit ridge on the same day? How can you control it?"
I'm John Russell.

He couldn't get a new job because of his medical history.
由于他的病史，他无法找到新的工作xm7Z8Z+Zuo0。

The traffic jam interrupted the flow of the cars.
交通阻塞中断了小车的行驶jnaK7f;^KdlZ]q;。

He was afraid of hurting my feelings.
他怕伤了我的心&_uG69DQHEcZ。

The President said the agreement would allow other vital problems to be dealt with.
总统说这项协议将能使其他关键问题得到解决-8l1=wRDmn。

5.Viesturs told the Reuters news agency that many teams tried to reach the summit as soon as they heard predictions of good weather.

As soon as I had made the final decision, I felt a lot more relaxed
我一作出最后的决定就感到轻松多了n[7G!&[wAw4Tv|.@S)nL。
He got married as soon as he graduated.
他一毕业就结婚了2Vh]3;_.6m!b7]-S。

6.The government has yet to say when the laws might take effect. 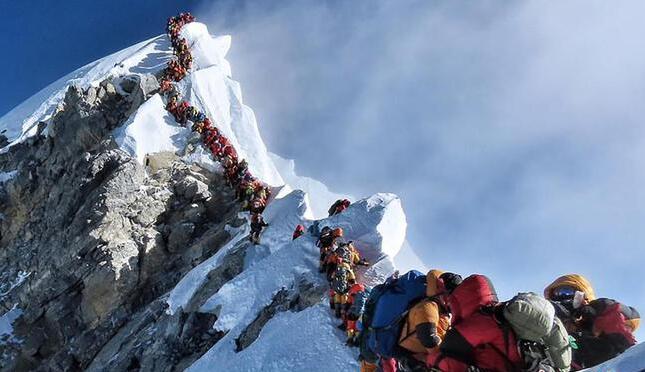