Writers from Austria and Poland Win 2018, 2019 Nobel Prize in Literature
The Swedish Academy has named Polish writer Olga Tokarczuk winner of the 2019 Nobel Prize for Literature.
It also announced that it was honoring Austrian Peter Handke with the 2018 Nobel Prize for Literature. The Academy cancelled the prize last year after many members fled the organization following sexual abuse accusations linked to it.
The Academy said it awarded Tokarczuk for imaginative writing that "represents the crossing of boundaries as a form of life."
The Polish writer's first published work came in 1989, a book of poetry called Cities in Mirrors. Her first novel, The Journey of the Book-People, was published in 1993. Last year, Tokarczuk became the first Polish writer to win Britain's Man Booker Prize for International Literature for her novel Flights. Her novel Drive Your Plow Over the Bones of the Dead, was on the short list of nominees for the 2019 prize as well. That prize went to another writer.
Tokarczuk spoke Thursday with readers in Bielefeld, Germany, hours after she won the Nobel. Asked about her profession, she said she was trained as a mental health professional. But she said, "I can only write." She said she is always working at the job, which includes traveling, observing and collecting facts as well as writing.
She also said she knew she might be a possible candidate for the award but she was not expecting it. She got a telephone call from the Swedish Academy while she was in a car.
"So it happened somewhere on a German highway, I don't even know exactly where," Tokarczuk said, to laughter.
Poland's finance minister says he will waive the tax expected on the $905,000 prize. The official admitted he has not read any of Tokarczuk's books but said he was happy at her success.
Tokarczuk has been deeply critical of Poland's conservative government.
The Swedish Academy said it named Peter Handke winner of the 2018 prize for "influential work that with linguistic ingenuity has explored the periphery and the specificity of human experience."
Handke's first novel was published in 1966. He also writes plays and is a political activist. The Austrian writer was an opponent of NATO's airstrikes against Serbia in the Kosovo war of the late 1990s. He was a supporter of the Serbian government under the leadership of Slobodan Milosevic. Handke has denied that Bosnian Serb troops carried out a campaign of genocide in the killing of 8,000 civilians in Srebrenica during the Bosnian war in the 1990s.
As a result, some critics are angry that he was given the Nobel Prize.
The Kosovo ambassador to the United States wrote in a Twitter post Thursday, "Something has gone terribly wrong!" She criticized the Nobel committee for choosing someone she said spreads ethnic hatred and violence.
At home in Paris Thursday, Handke called the decision to give him the literature award "courageous." He said the recognition gave him "a strange kind of freedom."
Serbian media and officials praised Peter Handke and his win. They described the writer as a "great friend" of the Serbs.
I'm Caty Weaver.

The rioting seemed primarily an eruption of ethnic hatred.
根本来说，这次暴行是一次民族仇恨的爆发aax8(S%AGeI=l。

Forensic experts carried out a painstaking search of the debris.
法医专家对残骸进行了极其仔细的搜索YWMb&&YlAODM。

He should pay and maintain you as well.
他得给你钱，还得供养你m)E+PIf+L5UX5。

5.She said she is always working at the job, which includes traveling, observing and collecting facts as well as writing.

Moral as well as financial support was what the West should provide.
西方国家应该提供道义支持和经济援助yo!Ye24PD2MihiU8qJ。
She can play tennis as well as basketball.
她也会打篮球，也会打网球iRhlL~&3(JiK5!D9B。

6.As a result, some critics are angry that he was given the Nobel Prize.

As a result, industry was overmanned and pen-pushers were everywhere.
结果是，企业人浮于事，到处都是耍笔杆子的人tDB+IS(FWD;。
As a result, the bad thing has been turned into a good one.
结果坏事变成了好事3rx0aBVS+xKMLHdw(#。 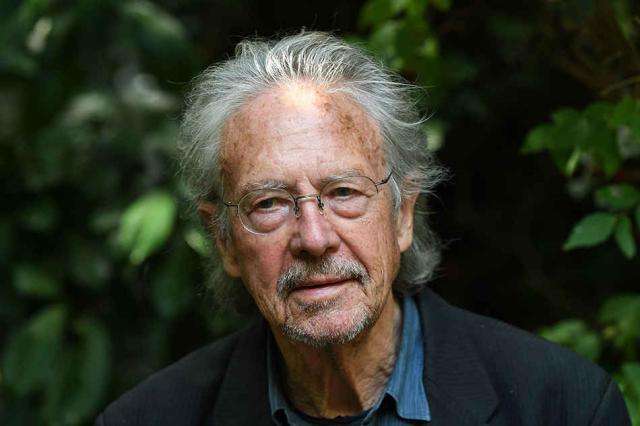