For Separated Koreans, Memories Fading and Time Running Out

Jin Gyeong-sun was in his early 20s when he fled North Korea during the Korean War. He left behind two sisters and a brother.

Nearly 70 years later, Jin still has not spoken to or seen his family since.

"I cannot even express my sadness in words," says Jin, who is now 89 years old and living in Seoul. ""I miss my family as much as ever."

For Jin and other Koreans who left family behind in the early 1950s, time is quickly running out to see their family on the other side of the border.

Relations between North and South Korea have worsened in recent months. Plans for government-approved family reunions are often delayed.

Too late for some

For many, it is already too late. Sixty percent of South Koreans who have registered for family reunions since 1988 had already died as of last month. Those numbers come from South Korea's Unification Ministry.

At 74, Lee Sang-won is among the younger North Koreans who fled during the war. He came to South Korea during the United Nations-led Hungnam Evacuation in 1950. He was 5 years old. He has difficulty remembering his family.

Since 1985, 21 rounds of family reunions have reconnected a total of 4,355 individuals and 1,757 families. Such events have taken place less often in recent years.

The parents of South Korean President Moon Jae-in also left North Korea during the Hungnam Evacuation. He has discussed the importance of restarting the family reunions.

In a statement last week, Moon said restarting the family reunions is "highest priority" for the two Koreas.

"It's wrong that governments in both the South and the North have not given them even a chance for such a long time," Moon said.

The most recent reunions took place a little over one year ago, at North Korea's Mount Kumgang resort. It included 83 North Koreans and 89 South Koreans. More had been invited to take part. But they chose not to attend after discovering their family members across the border had already died.

A few months later, Moon and North Korean leader Kim Jong Un agreed to make the reunions official. They created a permanent meeting place and permitted family members to write letters to each other. They also restarted video reunions.

But such plans have halted because of the collapse of nuclear talks between the two sides. North Korea has said it would not restart the reunions.

Last week, North Korea said it would accept the recommendation of the U.N. Human Rights Council, which urged the country to work with the South on helping separated families. But so far there appears to be no major progress.

It is a sad time for Jin. He says he has asked 21 times to attend reunion events, but has been rejected each time.

"There is little time for me, and people like me," Jin says. He would love to one day visit Pyongyang, his old hometown.

"Or at least send a letter," he adds.

The extension of sanctions comes as six-party nuclear talks continue to stall.

The companies have a total of 1,776 employees.

6.For Jin and other Koreans who left family behind in the early 1950s, time is quickly running out to see their family on the other side of the border.

Conditions are getting worse and supplies are running out.

Now Martin has begun to suffer the effects of AIDS, and he says his time is running out. 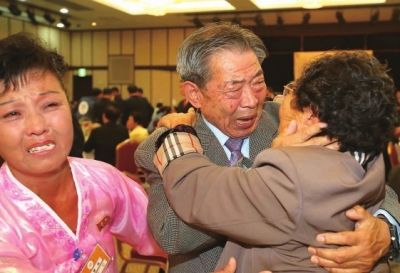