Indonesian President: New Capital Will Be on Borneo
The president of Indonesia announced on Monday where his country's new capital will be built.
President Joko Widodo said that after three years of studies, the government chose to build the capital in East Kalimantan province on the island of Borneo.
The goal is to move the national government outside of Jakarta, which is facing problems of overcrowding and pollution. Studies have shown that the land on which the city was built is sinking.
The new capital has not yet been named.
Widodo, known to Indonesians as Jokowi, said the new capital will be closer to the center of the country. He said that, because there are two cities near the proposed capital, many of the roads and other necessary infrastructure are already complete. He added that the new site had been chosen because there was little risk of earthquakes, floods, fires or volcanic activity.
Jokowi said the burden of keeping the capital in Jakarta was too heavy because it is also the center of finance, business and trade. The city, once known as Batavia, also is home to Indonesia's largest sea port and airport. The Greater Jakarta area is home to about 30 million people.
The president said the island of Java was not chosen as the site for the capital because the country's wealth and people are too highly concentrated there. Currently, 54 percent of the population lives on Java, Indonesia's fourth-largest island by land area.
Jokowi added that, "Economic disparities between Java an elsewhere would also increase" if the new capital were in Java.
East Kalimantan is believed to be rich in minerals and was once completely covered by rainforest. It is also home to some of the world's rarest animals, such as orangutans. However, large areas of forest have been cut down in recent years.
East Kalimantan has a population of about 3.5 million people. Jokowi said the new capital is to be completed in about 10 years and could cost as much as $32.5 billion. The government is expected to pay about 19 percent of that amount, with the rest financed by cooperation between the government, business groups, state-operated companies and private industry.
Indonesia's first president, Sukarno, once planned to move the capital to a central area on Borneo. After many years of discussion, efforts to move the capital moved forward in April, when Jokowi announced the plan.
The government is currently writing the law calling for the new capital. Parliament will than need to approve the move.
I'm Mario Ritter Jr.

The US, unlike the UN resolution, is calling for him to be ousted.
美国要求卡扎菲下台，这与联合国决议的要求不同[qvl2vn^MZz4I&=。

A free trade zone is an isolated, closed area, usually adjacent to a sea port.
保税区是个孤立、封闭的区域，经常濒临海港C15iAI&W0Sg7a~P1。

We have to cut down expenses, since our income decreases.
我们必须要削减开支，因为收入减少了1l9vI-,ot3。

5.However, large areas of forest have been cut down in recent years.

India has witnessed many political changes in recent years.
印度近年来经历了很多政治变动_!noqhmOLpB!。
In recent years commercial, cultural, travel and other contacts have proliferated between Europe and China.
近年来，欧洲和中国之间的商业、文化、旅游及其他交往发展迅猛-AkBsTH6%XBd.。

6.After many years of discussion, efforts to move the capital moved forward in April, when Jokowi announced the plan. 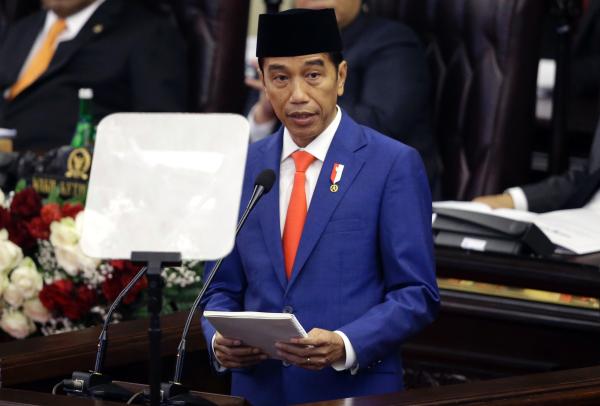