In Kashmir, News Gathering a Difficult Job
News media are having difficulty reporting from Kashmir.
The trouble started two weeks ago when India's central government took direct control of the territory. Since then, area newspapers either have not published at all or published in very small, limited editions.
Reporters working in Kashmir are having trouble gaining entry to areas surrounded by security forces. Traditional landline telephones are disconnected. Mobile phone service and the internet are not working.
Srinagar is Kashmir's summer capital. Its streets are filled with barriers to restrict the movement of protestors.
Sonia Sarkar is a journalist based in New Delhi. She was among the reporters to receive Indian government permission to visit the city. Sarkar said she was able to get around much of Srinagar during her three-day trip last week. Yet, she said security officers made it difficult to reach areas where protests take place.
"There is an attempt to create...fear...to prevent you going ahead," she said.
Sarkar was unable to get to the Soura neighborhood of Srinagar. Some observers believe that it is becoming the unofficial headquarters of resistance to India.
The British Broadcasting Corporation and Al-Jazeera television reported a large protest in Soura on August 9. At first, the Indian government denied there was a demonstration. Later, it said about 1,000 to 1,500 people attended.
Indian officials have said that journalists are free to visit Kashmir. Yet local Kashmiri reporters have a hard time gathering news, talking to people and filing reports.
The daily Kashmir Times was unable to publish for two weeks after India announced the change in Kashmir's status. The newspaper's leadership was unable to contact employees.
"Until about two days ago, there was not a single communication from our staffers in Srinagar...there was a complete information vacuum," said Anuradha Bhasin. She is the executive editor of The Kashmir Times. Bhasin is based in Jammu, the Hindu majority area outside the Kashmir Valley.
The newspaper finally published on August 21. The paper used information that came from New Delhi TV and news agencies.
"Security forces were more hostile to the local journalists," Bhasin said.
Some local reporters have said they sometimes act like local Kashmiris visiting patients in the hospitals to get past security positions. Also there are few people for reporters to question; most Kashmiris are staying inside buildings, and political leaders are in detention.
Sarkar said she had to be very careful getting video because the security forces would stop her. She also said Kashmiris were afraid to talk about the situation on camera.
"This has never happened; in Kashmir everybody has always been very willing to talk. Now, they are extremely careful," she said.
I'm Susan Shand.

Police operated under the umbrella of the security forces.
警方在保安部队的掩护下采取了行动g0w^cxjI&c。

Security controller shall advise security staff to report any incident by means of landline telephone.
安全控制员应建议保安人员使用固定电话汇报所有事件afLzdx%w9W-!yP7y0。

People should be free to express their individuality.
人们应该能自由表达他们的个性N9)fG%ARe8y2~N0lfUP1。

He claimed to be a journalist, and he got around.
他自称是一名记者，经常四处游历c&uUorH.6b。

5.Since then, area newspapers either have not published at all or published in very small, limited editions.

Since then he has been drawing a pension.
从那时起他一直领退休金6Mhz9(ET&_M%3。
Since then I've been waiting on events
自那以后，我就一直在观望事情的发展Y4SmqlABA]B。

6.The trouble started two weeks ago when India's central government took direct control of the territory. 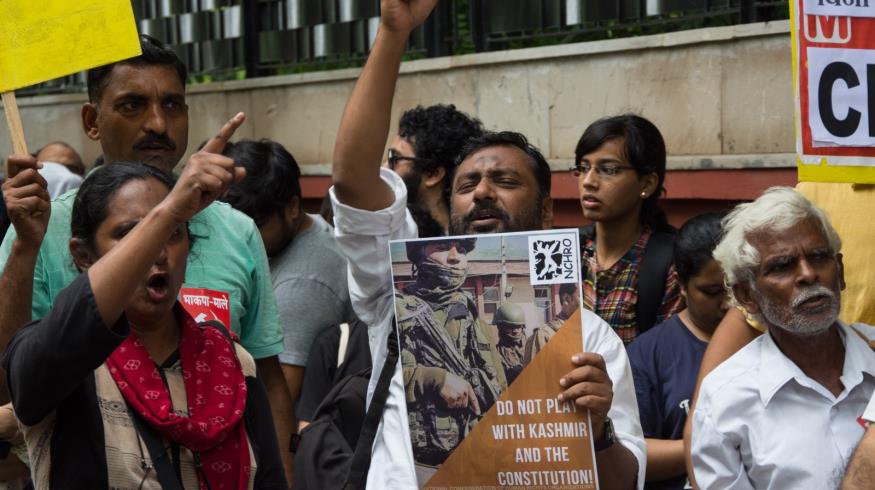