Two Experimental Drugs Found Effective Against Ebola Virus
International health officials say two experimental drugs used to treat Ebola infections appear to be saving lives in the Democratic Republic of the Congo (DRC).
Dr. Anthony Fauci of the U.S. National Institutes of Health (NIH) called the early results "some very good news." He said the new drugs "...may be able to improve the survival of people with Ebola." The NIH helped support the research.
The findings come from a study of four different drugs that started in November of last year. But an independent monitoring group recommended last week that the study be ended early. The group recommended that all new patients should receive either of the two drugs that showed the best results.
The drugs are antibodies that work by blocking the virus in the body. One drug, REGN-EB3, is made by Regeneron Pharmaceuticals. The other, mAb114, was developed by the U.S. National Institutes of Health (NIH). Patients receiving these two drugs "had a greater chance of survival compared to those" receiving the other two drugs, the group found.
An experimental vaccine is also showing signs of effectiveness against the virus.
How were the drugs tested?
The research was designed to test the effectiveness of the drugs on as many as 725 people infected with the Ebola virus in North Kivu and Ituri provinces. An outbreak of Ebola in those parts of the DRC has killed more than 1,800 people since August 2018.
Ebola, a kind of hemorrhagic fever, has a very high rate of mortality. Dr. Michael Ryan of the World Health Organization said about 75 percent of those who become infected and receive no special care die.
But the recent study found that less than one-third of patients who were infected died when they took the two new drugs. Those patients who had low levels of the virus in their blood had even better results.
Among people who sought treatment early, the mortality rate was 6 percent for REGN-EB3 and the rate for mAb114 was 11 percent.
Dr. Ryan of the WHO said he hoped the results would persuade more patients to seek care as soon as symptoms appear. "Getting people into care more quickly is absolutely vital," he said.
However, treating the disease is made more difficult because the affected areas of the eastern DRC face ethnic conflict.
Jean-Jacques Muyembe, director general of the National Institute of Biomedical Research in DRC, helped lead the study. He said, "From now on, we will no longer say that Ebola is incurable."
I'm Mario Ritter Jr.

They no longer had him as a friend.
他们再也不把他看成朋友了AUjz;Qp8jE~[。

How to eliminate ethnic prejudice and discriminate, and to reduce ethnic conflict?
如何消除民族偏见与歧视，进而减少种族冲突?

Our work can be compared to a battle.
我们的工作好比一场战斗h%7w~i9gG=。

5.He said, "From now on, we will no longer say that Ebola is incurable."

6.Dr. Ryan of the WHO said he hoped the results would persuade more patients to seek care as soon as symptoms appear.

As soon as we found this out, we closed the ward.
我们一发现此事就关闭了病房Kp&i4U)eX8kA;fl2]9Y。
He got married as soon as he graduated.
他一毕业就结婚了MX_itnb4i[k!。 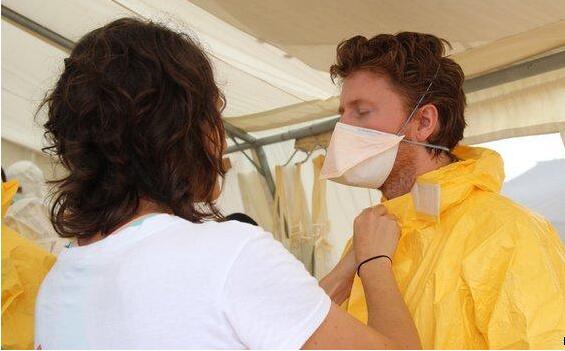