Man Who Tried to Escape Prison Dressed as Woman Found Dead
A man who tried to escape jail in Brazil by dressing as his daughter was found dead in his room Tuesday. Prison officials reported that he appeared to have taken his own life.
News of the man's attempt to escape went viral last weekend. The man had tried to walk out of the prison wearing a rubber mask to hide his identity. But he was caught before he could leave and his unusual attempt failed.
Clauvino da Silva was a drug dealer from the city of Angra dos Reis. He was stopped by prison guards at the Bangu prison complex last Saturday as he tried to go out the front door after visiting hours disguised as his daughter. Prison officials in the state of Rio de Janeiro said his plan was to leave his daughter inside the prison in his place.
When he began trying to speak like a woman, "the guard realized that it was an attempted jailbreak and identified him," Moyses Henriques said. Henriques helps lead prison operations in Rio state. "It was an inmate trying to escape as a woman."
Henriques said officials believe the disguise had been secretly brought to the prison by a pregnant woman. Such women are often used to transport things illegally to prisons because they do not face the careful searches of other visitors.
Prison officials said Silva's daughter and seven other people were arrested on suspicion of having tried to help him escape. Before his death, Silva was moved to another area of the prison, the officials added.
Henriques said Silva's jailbreak attempt was one of hopelessness. He was "facing a sentence of 73 years, and he recently got another 25 years more," said Henriques.
Brazil's prisons have become a major issue for new President Jair Bolsonaro, who has promised to fix years of growing crime and violence. Last week, at least 57 people died after a prison riot broke out in the northern state of Para.
Brazil's prison population has increased by 800 percent in 30 years to around 750,000 inmates. The nation now has the world's third-largest number after China and the United States. Prison gangs used to form to protect inmates and push for better conditions. But they now hold great power that extends beyond prison walls.
The gangs are linked to bank robberies, drug trafficking and the illegal transport of guns. Jailed gang leaders often give orders secretly through mobile phones.
I'm Alice Bryant.

With the increasing use of mobile phones and computers, less people tend to write letters.
随着手机和电脑使用的增加，倾向于写信的人变少了0aruP8wNOl18n。

The article discussed the illegal transport and dumping of dangerous chemicals.
这篇文章论述了危险化学制品的非法运输与倾卸问题d4]3CCF*k=lvtij。

The gang admitted that they had committed four recent bank robberies.
这个团伙承认了他们最近所犯的四起银行抢劫罪a@u~)6ITXtiudp[#X(Q。

5.Prison officials reported that he appeared to have taken his own life.

Everyone believed you had taken your own life.
所有人都说，你已经自杀了LI.MycIsiCtYqg。
A mother who had taken her own life just three weeks before.
就在三个星期前她的妈妈离开了人世+B)u*kLrpXT7ee7*jn。

6.Last week, at least 57 people died after a prison riot broke out in the northern state of Para.

When hostilities broke out he returned to England and joined up.
战事爆发之后，他回到英格兰参军了KINH*ZrA=jMR。
Shooting broke out after the guards surrounded a villa in the city.
卫兵包围了该市的一所别墅后便发生了枪战w_J.hz9Rnsyxp。 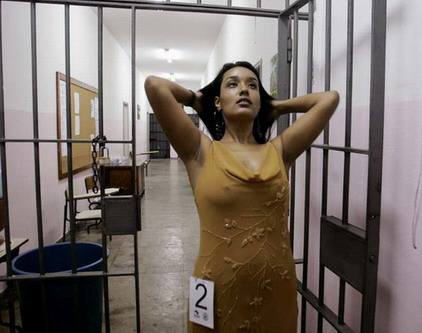