The History of American Breakfast
Since the earliest days of the United States, Americans began their days by eating whatever was most easily available. These foods often included bread, eggs or leftovers – food left over from the night before.
Today, ease is still an important factor when it comes to breakfast. However, what people eat has changed over time. And some of today's common breakfast foods, such as cereal, are the result of very effective marketing.
"Advertising was practically invented to sell cereal," says Heather Arndt Anderson. She is the writer of the book "Breakfast: A History."
Arndt Anderson adds, "One of the first ways advertising was successfully or effectively used was to convince mothers that it was okay for their children to eat these instant cereals. It sort of offered working mothers a chance to let kids take care of themselves in the morning."
As women entered the workforce to help support their families, cereal was a food kids could make on their own.
"That's still sort of the power, really the lasting effect of breakfast as being the first meal that kids do learn how to prepare themselves," Arndt Anderson says.
Advertising also played an important part in orange juice becoming a morning drink. In 1916, farmers grew more oranges than usual, so advertisers began saying, "Drink an orange." They aimed to persuade people that drinking orange juice was a healthy way to start the day.
Two years later, a worldwide flu epidemic caused people to drink more orange juice for its health benefits.
As for coffee, it might have the 1773 Boston Tea Party to thank for its popularity in the United States. In that year, American colonists protested British taxation by throwing tea into Boston Harbor. In time, coffee became so popular that people traveling to the American West in the 1830s made sure to carry coffee beans on the journey.
Pancakes have also been around for a very long time. Researchers believe the world's oldest naturally preserved human mummy ate a pancake-like food as one of his last meals.
Researchers think pancakes may have been made in the morning because they are much quicker to prepare than bread. Cooks could then have to time to make fresh bread for dinner.
Americans still eat breakfast foods like bread and eggs that their ancestors did. Writer Heather Arndt Anderson notes that people's concerns about healthy food choices have also stayed the same.
She says the idea of clean eating and healthy eating has been around for hundreds of years. She adds, "The only thing that's changed has been the details with which we define what these things are — what clean eating is, and being healthy."
Arndt Anderson hopes more Americans will see leftovers as a breakfast food. She adds that leftovers taste good and are a great way to reduce waste.
I'm Jonathan Evans.

I hope you'll remit me the money in time.
我希望你能及时把钱汇寄给我&OsJ,Tt;)(Nc。

Orange juice seems to disagree with some babies.
橙汁似乎不适合某些婴儿饮用6)a!U|^=YsAT@^W。

4.for a very long time 长时间的

It is possible that your system has been up for a very long time.
系统可能已经运行很长时间了D_39kM7-|5%%。

5.Today, ease is still an important factor when it comes to breakfast.

when it comes to 说到；提及

When it comes to photography, I'm not an adept.
要说照相，我不是内行|qX&BEHxqDcS+^AYH。
They are inexperienced when it comes to decorating.
说到装修，他们就没有什么经验了iAUqVmxPiCz3awt(i。

6.It sort of offered working mothers a chance to let kids take care of themselves in the morning." 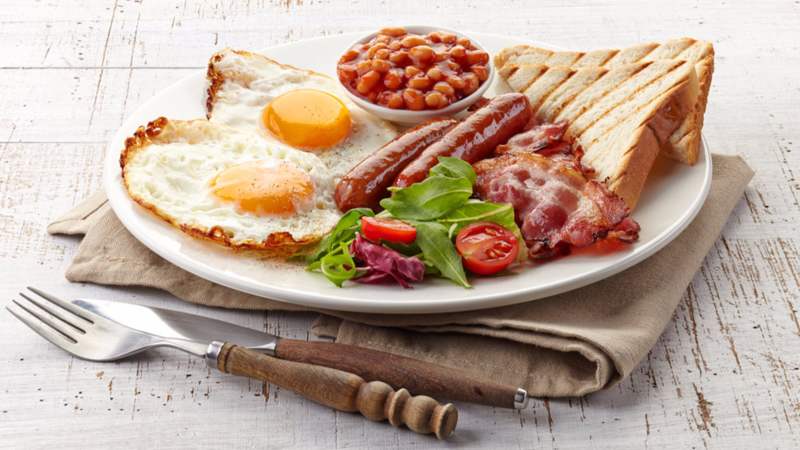