US President Steps into North Korea, Talks to Restart
U.S. President Donald Trump has praised his latest meeting with North Korean leader Kim Jong Un.
Trump described the talks as "very productive."
The two leaders met Sunday at Panmunjom, along the demarcation line separating North and South Korea. By stepping across the line, Trump became the first United States president to enter North Korea while in office since the division of Korea after World War II.
"Stepping across that line was a great honor," Trump said.
His private talks with Kim lasted about 50 minutes. After the meeting, Trump announced that he and Kim had agreed to form teams to restart talks between U.S. and North Korean officials.
The U.S. president said that both sides would meet over the next few weeks. "Speed is not the object...we want a really comprehensive, good deal," he added.
Also present at the meeting was South Korean President Moon Jae-in. The three leaders did not make a joint public statement but appeared together before Trump's private meeting with Kim.
Moon praised the meeting as an important step. "We have taken one big step forward," he said.
Where are negotiations on North Korea's nuclear program?
The meeting at the demilitarized zone, known as the DMZ, is Trump's third with Kim Jong Un. The first was in Singapore in June of 2018. The second, held in Hanoi, Vietnam's capital, in February, ended without an agreement.
Trump said his negotiating team would continue to be led by the U.S. special envoy to North Korea, Steve Biegun. He said North Korea "was putting someone in charge who we know and who we like." He did not give a name.
However, the two sides disagree over what should be done with North Korea's nuclear program.
In recent weeks, North Korea had expressed anger over continuing U.S. sanctions that have severely hurt its economy. The U.S. has said that it will not ease the restrictions until North Korea fully gives up its nuclear weapons.
Mintaro Oba is a Korea expert and a former State Department official. He said it is unclear whether either side is willing to soften its position.
"There is no sign that the two sides were prepared to address the underlying substantive problems, like differences over sanctions relief, that have made diplomacy so difficult," he said.
U.S. officials have yet to say whether they are willing to accept some steps toward denuclearization in exchange for some easing of the sanctions.
I'm Mario Ritter Jr.

He is in charge of the school work.
他负责学校工作Yb~RLXTPFwSkK。

The president said he'd made no firm decision on whether he would run for a second term in office.
总统说他还没有下定决心是否竞选连任pdp[cmmaJ0@#Yi。

Your president must make a public statement.
你的总统必须作一个公开声明~Ly_r7E6~aKd@%Xja。

I want to say it was a totally private meeting.
我想说，这是一个完全私人会面I13^nduw|ebe(_~n%8t。

5."We have taken one big step forward," he said.

6.There is no sign that the two sides were prepared to address the underlying substantive problems, like differences over sanctions relief.

There are calls for his resignation, but there is no sign yet that he will comply.
有人要求他辞职，不过还没有迹象表明他会屈从kcClNbbN%5x!bMbf=Qxc。
There is no sign that the Party will loosen its tight grip on the country.
没有迹象显示该党会放松对国家的严密控制vRkBF!TDXO。 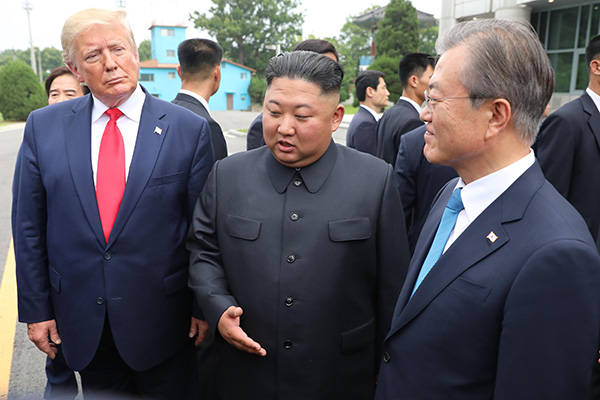