Trump: Talks Are 'Doing Great,' North Korea Disagrees
U.S. President Donald Trump says his North Korea policy is "doing great."
South Korean President Moon Jae-in says talks with North Korea are making "progress."
Yet the North's government seems to disagree about the direction of nuclear talks with South Korea and the United States. North Korea's Foreign Ministry Thursday criticized the two countries, and said it could completely pull out of the talks.
The Korean Central News Agency reported the ministry's statement. It added there is no guarantee negotiations would restart.
The news agency noted North Korean leader Kim Jong Un's demand that the United States change the way it negotiates. He wants a new U.S. approach to the talks by the end of the year.
"Our repeated warning is not...an empty word," said Kwon Jong Gun. He is director-general of the Department of American Affairs at the North Korean Foreign Ministry.
Widening gap
The comments are evidence of the differences between the appeasing language used by U.S. officials and the aggressive language used by North Korea.
"There is a big disconnect," said David Kim. He specializes in East Asia security policy at the Stimson Center, a research center based in Washington, D.C.
Delayed talks
The nuclear talks have been on hold since the February summit of Kim and Trump in Vietnam. That meeting ended without an agreement.
Kim was unhappy with the U.S. government's slow easing of sanctions against North Korea. Trump was unhappy that Kim would not agree to completely give up his country's nuclear program. Since then, North Korea has ignored U.S. requests to restart lower-level talks.
The two leaders recently exchanged personal letters. Trump called the letters "beautiful," while Kim said he was seriously thinking about their "interesting" content.
South Korea's Moon announced Wednesday the United States and North Korea are involved in "behind the scenes" talks on a third Trump-Kim meeting. He also suggested North and South Korean officials are holding meetings.
But the North Korean Foreign Ministry on Thursday denied there were any talks with the South Korean government. It also rejected the idea of the South helping with contacts between the North and the United States.
The foreign ministry said that South Korea is falsely spreading the idea that the two Koreas are in "closed-door meetings." It added that South Korea should mind its own business.
Trump to visit DMZ?
Trump plans to travel to South Korea later this week. During his two-day visit, he is set to hold talks with President Moon. South Korean officials say Trump may also visit the demilitarized zone, DMZ, separating the two Koreas.
Some people thought Trump might use a DMZ visit to hold a third meeting with Kim. But before leaving Washington, Trump said he would "not quite" meet with the North Korean leader.
"But I may be speaking to him in a different form," Trump said.
Both Trump and Kim often praise their friendly relationship. Both have said they will consider a third meeting. U.S. officials have not commented on Moon's suggestion that planning for the meeting has begun.
Hostile comments to continue?
In recent weeks, North Korea has increased its aggressive language, but appears to be doing so carefully. It does not attack Trump, but, instead, it attacks lower-level U.S. officials.
Last month, North Korea restarted tests of ballistic missiles for the first time in 18 months. However, it has not resumed testing its longer-range missiles because that would be seen as an offensive move.
I'm Susan Shand.

Many people travel to work by car.
很多人开车去上班MaT]1K83_#gFL。

He is thinking of giving up teaching.
他在考虑辞去教书的工作9z%t6k9*LwV@hebHA。

Since then he has been drawing a pension.
从那时起他一直领退休金=C@)((FtR6。

5.North Korea's Foreign Ministry Thursday criticized the two countries, and said it could completely pull out of the talks.

pull out of 退出

The World Bank should pull out of the project.
世界银行应从该项目中撤出.J-ob1bxT*bf+X@wbQ4。
France was going to pull out of NATO.
法国打算退出北约uO]5;m2]Bq5g0&w。

for the first time 第一次 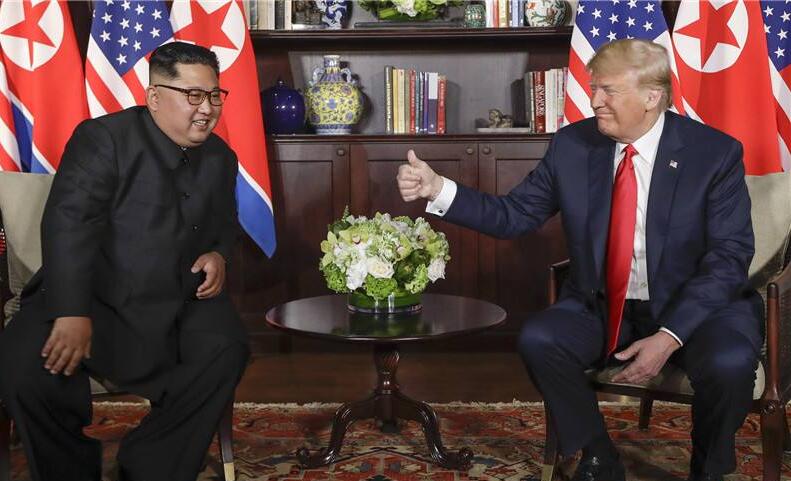