US Blames Iran for Attack on Tankers in Gulf of Oman
American Secretary of State Mike Pompeo says Iran "is responsible for the attacks" on two oil tankers in the Gulf of Oman earlier Thursday.
Pompeo said the United States made the judgement "based on intelligence, the weapons used, the level of expertise needed to execute the operation, and recent similar Iranian attacks on shipping." He added that no other group "operating in the area has the resources and proficiency to act with such a high degree of sophistication."
Pompeo also said the U.S. would defend its forces and interests in the area but gave no details on any immediate plans.
In May, the U.S. sent an aircraft carrier battle group to the Persian Gulf in response to, what it said, were threats from Iran. The U.S. had accused Iran of using mines to attack four oil tankers near the port of Fujairah in the United Arab Emirates. Iran has denied any involvement.
However, Iran has repeatedly said it would block the Strait of Hormuz, near where the attacks happened, if it cannot sell its oil because of U.S. sanctions. About one third of the world's oil trade passes through the strait. News of the attack caused the price of oil to jump as much as 4%.
Iran has also warned that it is ready to break the 2015 nuclear deal with world powers that the Trump administration withdrew from last year. Under the deal reached with China, Russia, France, Germany, Britain and the U.S., Iran had agreed to limit its enrichment of uranium in exchange for the lifting of economic sanctions.
The latest attacks happened as Japan's Prime Minister Shinzo Abe was meeting with Iranian leaders in an attempt to lower tensions in the area. Iran's leader Ayatollah Ali Khamenei warned after the meeting that, while it does not seek nuclear weapons, "America could not do anything" to stop Iran if it did.
The attack took place one day after Iran-supported Houthi rebels in Yemen fired a missile at an airport in Saudi Arabia, injuring 26 people. The Houthis had also claimed an armed drone strike last month on Saudi oil pumping stations.
Saudi Arabia, which is fighting the Houthis, called Thursday's attack a "major escalation." Russia, one of Iran's main allies, urged caution, saying no one should rush to judgement about the attack or use it to put pressure on Tehran.
International Tanker Management operates the Front Altair, one of the damaged tankers. The company said that an explosion resulted in a fire on the tanker. Bernhard Schulte Ship management operates Kokuka Courageous, the other ship involved. That company said the hull of its tanker was damaged in a "suspected attack."
Iranian state television said 44 sailors from the two tankers were rescued by other ships in the area. They were then brought to an Iranian port in the southern area of Hormozgan.
I'm Jonathan Evans.

They are all against the nuclear deal with Iran.
他们全都反对与伊朗的核协议8qdgs+o&-_r5eH。

An estimated 1600 vessels pass through the strait annually.
估计每年有1,600艘船通过该海峡;~6)VTa;BD+Z8。

Another dust-up took place in the teahouse.
茶馆里又发生了一场打斗N6M;t^gxDJ*#(。

Tugs were sent to the damaged oil tankers.
拖船被派去拉损坏了的油船J3suwGx]^@r)@。

5.No one should rush to judgement about the attack or use it to put pressure on Tehran..

He may have put pressure on her to agree.
他可能向她施加了压力，迫使她同意RJK~&[XN6*6,dy3bn.。
They put pressure on the Government to change its intransigent stance.
他们向政府施压以迫使其改变不妥协的立场qL,U1JBwmeF.1s。

6.American Secretary of State Mike Pompeo says Iran "is responsible for the attacks" on two oil tankers in the Gulf of Oman earlier Thursday.

The sun's ultraviolet rays are responsible for both tanning and burning.
阳光中的紫外线是皮肤晒黑和灼伤的根源7fa+(f4Q(d+s。
We are all entirely responsible for our actions, and for our reactions.
我们都对自己的行为和反应负全责IZ,9QX_)wmJXC。 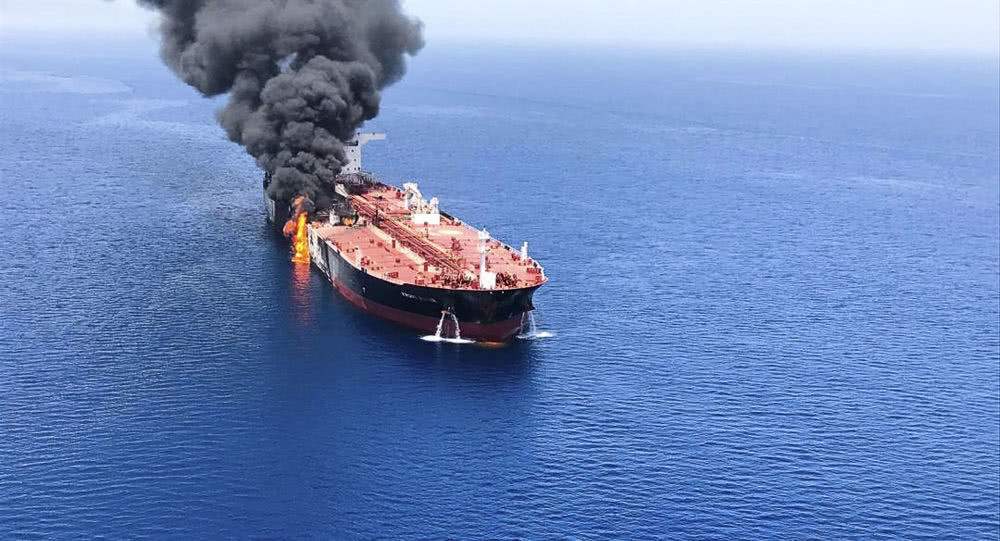