Japanese Women Stand Against High Heels
Thousands of Japanese women have joined a social media campaign against rules for what kind of clothing is acceptable at work. The campaign also rejects expectations that women wear high heels in the workplace.
The movement is called #KuToo. The term #KuToo is a play on the Japanese word "kutsu" for shoes and "kutsuu," meaning pain.
Yumi Ishikawa launched the campaign after leaving a message on the social networking service Twitter. She wrote about being forced to wear high heels for a part-time job at a funeral home. The 32-year-old said the requirement is an example of gender discrimination.
Ishikawa also works part-time as a writer and as an actress. She has started on online appeal to demand the government bar companies from requiring female employees to wear high heels on the job. As of Tuesday, nearly 20,000 women have signed the appeal.
Ishikawa wrote that wearing high heels causes health problems for women with their feet and in the lower back. "It's hard to move, you can't run and your feet hurt. All because of manners," she wrote, noting that men do not face the same expectations.
Japan's gender discrimination
While many Japanese companies may not exactly require female employees to wear high heels, many women do so because of tradition and social expectations.
Ishikawa said she had been the target of online harassment over the campaign, mostly from men. "I've been asked why I need to make such a big deal about this - can't I just work this out with your company?" she said.
Ishikawa told the Reuters news agency, "We need people to realize that gender discrimination can show up in lots of small ways." She noted the way women are treated by their supervisors and expectations that women will do all the housework and childcare - even if they work outside the home.
Japan, she said, is "way behind other countries in this regard." Japan finished in 110th place out of 149 countries in the World Economic Forum's gender-equality ratings.
Until recently, Japanese businessmen were expected to wear neckties at work. However, that has changed since the government launched a campaign in 2005 to persuade companies to turn down air-conditioners and reduce electricity use.
"It would be great if the country had a similar kind of campaign about high heels," said Ishikawa. The health ministry said it was considering the appeal, but had nothing more to say.
In Britain, Nicola Thorp launched a similar appeal in 2016 after she was sent home from work for refusing to wear high heels.
A parliamentary investigation found there was discrimination in British workplaces, but the government rejected a bill banning companies from requiring women to wear high heels.
I'm Alice Bryant.

Why don't you wear shoes with high heels?
为什么你不穿高跟鞋呢？

Until recently he worked very hard on his mysterious experiments.
最近他一直努力工作进行他神秘的实验K,I+^.xks1a6*^cpp。

Three women allege that they were the victims of gender discrimination on Wall Street.
三位女性员工控诉她们是华尔街性别歧视的受害者0Y#EeeC*m_*p4(=;。

We have all witnessed the power of social media.
我们见证了社交媒体的实力[ekzCPN2y)6W&z|G@I。

5."I've been asked why I need to make such a big deal about this - can't I just work this out with your company?" she said.

6."I've been asked why I need to make such a big deal about this - can't I just work this out with your company?" she said. 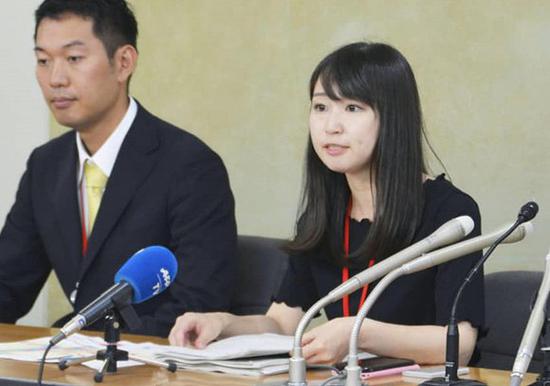