Sri Lanka Tourism Suffers After Deadly Bombings
The deadly bombings that struck Sri Lanka on Easter Sunday have led many foreign visitors to stay away from the island nation.
The Lonely Planet travel guide named Sri Lanka as its top nation for travelers in 2019. The country is known for its beautiful beaches, ancient ruins, wildlife and parks.
But on April 21, more than 250 people were killed in several bomb attacks at hotels and churches. Among the dead were 45 foreigners, including visitors from China, India, the United States and Britain. The Islamic State group has claimed responsibility for the blasts.
Since the attacks, foreign tourism has dropped sharply.
Sri Lankan travel officials say many foreigners who were planning to visit the country over the next few months have canceled their plans. Officials reported that, overall, visitor arrivals to Sri Lanka have dropped about 80 percent since the bombings.
The tourism industry makes up about 4.9 percent of Sri Lanka's Gross Domestic Product (GDP). In 2018, 2.3 million tourists visited the island, bringing in about $4.4 billion. That was an increase of nearly 12 percent from 2017.
Industry experts say hotel occupancy rates across the island have fallen by at least 85 percent. Most beaches, eateries and stores in popular tourist areas are now empty.
Many foreign travelers usually visit Hikkaduwa, on the southwest coast. The area is known for its good surfing conditions and clear waters for snorkeling. The Associated Press reported that on a recent day, only a few of the area's 27 hotels were even open. Most eateries that sit along the six-kilometer beach were closed.
The Hikkaduwa Beach Hotel was one of the few places still open. On the day of the bombings, all 50 of its guest rooms were full. Now, few people are staying there.
"It's a real disaster. We don't know what to do right now," said Sanjeewani Yogarajah, who works at the hotel. She said the attack has so far cost the business $31,000. The loss in earnings has forced the hotel to send half of its workers home.
Lankesha Ponnamperuma, who runs the hotel company Hikka Tranz, is one of the luckier ones. He says that while foreign visitors are mainly staying away, his business is surviving because many local people are using the hotels. On some days, up to two-thirds of the company's hotels are filled, he said.
The president of Sri Lanka's Hotels Association, Sanath Ukwatta, said many hotels have been advertising rates 30 to 50 percent lower in an effort to get Sri Lankans to come. While he admits such offers will not fully solve the economic problems, they can still "help at least to keep the hotels going."
One visitor to Hikkaduwa beach who spoke to the AP does not seem to mind the lack of other foreign visitors in the area. Alexi Konchayenko, a sports trainer from Ukraine, drank fresh coconut water and enjoyed the sunny beach.
Bomb blasts can happen "anywhere, anytime," Konchayenko said. He added that he was not afraid to be there and would probably come back. "Sri Lanka is an amazing country. This is my first visit and I will tell my friends also to come."
Hotel worker Sanjeewani Yogarajah says one of the biggest concerns for industry officials is a travel ban issued for Sri Lanka by several countries after the attacks.
"The ban is our main worry. Until it is removed or softened, we can't start our marketing to attract tourists," he said. "If it is lifted soon, we are hopeful we can bounce back this year, or otherwise definitely next year."
I'm Bryan Lynn.

He makes up for lost time and starts to kill people.
他为弥补失去地时光开始了杀戮3)Tv-Ntj0LNEY。

We chose a few of the commonest lexical items in the languages.
我们选取了各语言中最常见的几个词汇9*#Wj#NzHhI.ai33。

You might as well tell him right now.
你不妨现在就告诉他y~#0De+5Er。

5.Many hotels have been advertising rates 30 to 50 percent lower in an effort to get Sri Lankans to come.

Mass burials are now under way in an effort to ward off an outbreak of cholera.
为防止霍乱爆发正在进行大规模掩埋.65WZsIm^lsJ=[%r(s=。
He finally left home in an effort to counter the tyranny of arranged marriage in the old society.
他弃家出走，是对旧社会婚姻压迫的反动hk+&e[;k^j,n#cL_h。

6.The Islamic State group has claimed responsibility for the blasts. 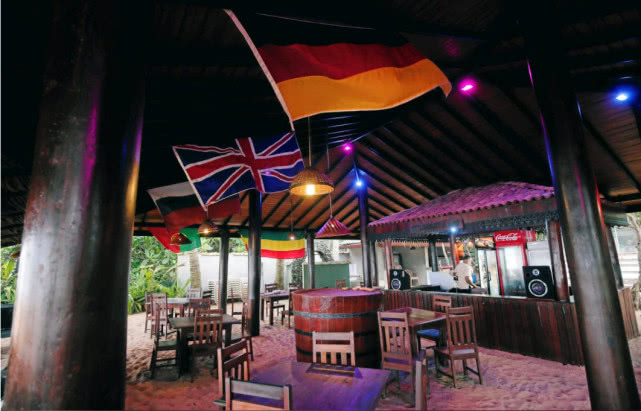