Americans Believe Texting while Driving Is Dangerous, Yet Still Do It
Many people cannot live without modern technology products, especially their mobile phones. They use the devices to stay in contact with family and friends. The most common method of communication is by sending written text messages, a custom known as texting.
A new study suggests that more than half of U.S. parents believe texting while driving a car or other vehicle is unsafe. Yet most of those questioned said they do it anyway.
The finding was reported earlier this month in the scientific publication JAMA Pediatrics.
Researchers questioned 435 parents from across the United States. These men and women lived in 45 of the 50 states.
Regan Bergmark led the survey. Bergmark is a medical doctor with Brigham and Women's Hospital and Harvard Medical School in Boston, Massachusetts. She told the Reuters news agency that many people believe texting while driving is unsafe but have also likely done it. She said that this then creates a false sense of security. It strengthens their beliefs that they personally are in no danger.
In fact, the survey found that 52 percent of millennial parents said they thought it was "never" safe to text and drive. The same goes for 58 percent of older parents. But almost two-thirds of parents reported reading texts while driving, and more than half of them have also written texts, the researchers found.
For the survey, millennials were defined as individuals being from 22 to 37 years of age. The millennial generation includes many digital natives, meaning they grew up with smartphones and other mobile devices. The survey also found millennial parents were more likely to have many other dangerous habits while driving than older parents. They were more likely to use email while driving and drive faster than the speed limit.
"The problem with smartphones is that they have become an unavoidable part of daily life for most people," Bergmark said.
"Many people are expected to be reachable by phone or email immediately, to be reachable for their children or work," she added. "Being a responsible adult therefore often means always being reachable - yet we also know that while driving, being reachable carries with it the risk of a crash."
Almost 16 percent of millennial parents and 10 percent of older parents in the survey said they had been in at least one crash over the past year.
Compared to people who did not experience a crash, those who did were much more likely to have a number of unsafe driving habits. These include driving over the speed limit, texting, emailing, and doing other things on their phones, the survey found.
About three in four parents said they did not remember their child's doctor speaking to them about distracted driving or the dangers of texting while driving.
Only about one in four millennials and about one in six older parents had used computer application software or smartphone programs aimed at reducing distracted driving.
The study was not a controlled experiment designed to prove whether or how texting or other activities might cause crashes. It was also not designed to prove if any given interventions might help reduce this risk.
"In general, it is never safe to use a smartphone while driving," said Despina Stavrinos. She is the director of the Translational Research for Injury Prevention Laboratory at the University of Alabama at Birmingham. She was not involved in the study.
"There are a number of apps that can help to limit distracted driving, by disabling cell phone features when the vehicle is in motion," Stavrinos said. "The simplest thing to do is to put the phone out of sight and out of reach to reduce the temptation to drive distracted."
"However, they are not the only dangerous source of distraction," she added.
I'm Dorothy Gundy.

You've got to keep to the speed limit.
你必须遵守限速规定dx^]!rkFMW1G。

I think the computer plays a very important role in our daily life.
我认为电脑在我们的生活中充当了一个很重要的角色QQ_A+QqsW#*XT。

She had a confused idea of life in general.
总的来说，她对生活非常困惑30l3jo#Kjz4K^P^#x。

He got round the corner out of sight.
他绕过拐弯处便不见了EXSlWW*_CY(]Qd2I06。

5.They use the devices to stay in contact with family and friends.

6.The simplest thing to do is to put the phone out of sight and out of reach to reduce the temptation to drive distracted.

You have to set goals that are almost out of reach.
你必须把目标定得近乎触不可及bSP1;v)[.&J*u7pu2U+。
We'd telephone to mary, but she's out of reach.
我们要打电话给玛丽，可和她联系不上-ph]@zD3]lh*0LUy-。 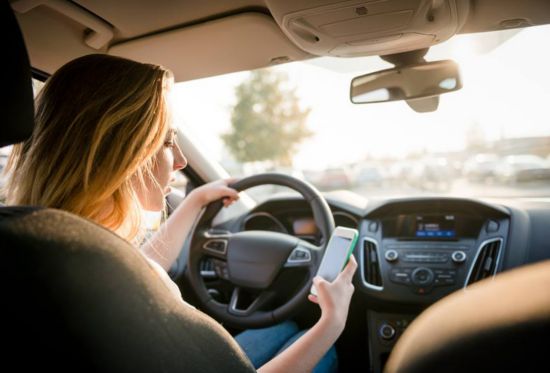