‘Intimate Audrey’ Exhibition Now Open in Brussels
A new exhibition celebrating the life of actor Audrey Hepburn opened recently in Brussels, Belgium. The opening at the Espace Vanderborght museum marks the 90th anniversary of the movie star's birth in the Belgian capital. She died in 2003.
Hepburn's son, Sean Hepburn Ferrer, organized the exhibit called "Intimate Audrey." The collection includes hundreds of private and professional camera images, as well as objects from some of Hepburn's films. Among these is the motor vehicle used in the 1953 movie "Roman Holiday." Hepburn won an Academy Award for her performance in the film.
Ferrer said he wanted to offer a more personal look of the life of the British actress. In her later life, Hepburn spent her time working with aid organizations. She also became a goodwill ambassador for the United Nations Children's Fund.
Her son told Reuters, "She lived a humble life, a simple life, and maybe in there lies the key to why she is still so beloved today."
Hepburn was born in 1929 in Brussels to a Dutch mother and a British father. She later moved to London for ballet training and later turned to acting. She appeared in the play "Gigi" in New York in 1951.
She starred in a number of films in the 1950s and 1960s, including "Breakfast at Tiffany's," "Charade" and "My Fair Lady."
Visitors can also view Hepburn's writings and fashion drawings. Ferrer said one important feature of the exhibition was a reproduction of a cherry blossom tree. The tree is a tribute to his childhood home in Switzerland which his parents bought in 1963.
He added, "It is an unusual exhibition because it has been completely devoid of the Hollywood aspect of her career..."
The museum show will close on August 25.
I'm Jonathan Evans.

We have bought in large stocks of this material.
我们购进了一大批这种材料e=8Q%9D[BX。

He turned to look back, but by then she was out of sight.
他转头看去，但那时她已经不见了smVaxa)^z#@(bEe。

5.The collection includes hundreds of private and professional camera images, as well as objects from some of Hepburn's films.

Moral as well as financial support was what the West should provide.
西方国家应该提供道义支持和经济援助NH,%WF7COTjk-^MX。
She can play tennis as well as basketball.
她也会打篮球，也会打网球ylm^zj1Mub.=。

We have lived here quite a number of years.
我们在这儿住了好些年了j5dQ3CT~^%。
The police rounded up a number of suspects.
警方围捕了一些嫌疑犯L|d!;JiTd&0-d(!。 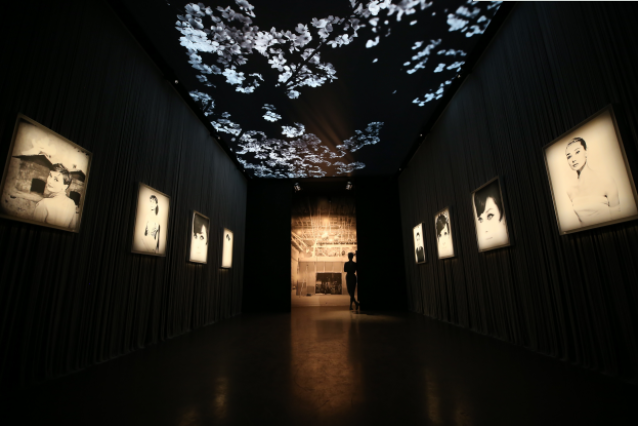