Paris' Notre-Dame Cathedral Burning
A major fire on Monday began to burn at France's world-famous Notre-Dame de Paris Cathedral.
Flames could be seen rising through the top of the monument. Its tall, narrow spire later collapsed.
The cathedral dates back to the 12th century. French writer Victor Hugo used it as the setting of his famous story, The Hunchback of Notre-Dame, first published in 1831.
The cathedral is one of the world's most famous tourist sites. About 12 million people visit Notre-Dame each year. It sits in the center of Paris, along the Seine River.
The mayor of Paris, Anne Hidalgo wrote on Twitter Monday, "A terrible fire is underway at Notre-Dame Cathedral in Paris." Hidalgo added that Paris firefighters were still trying to contain the fire. She urged people to stay away from the area.
As the cathedral's roof continued to burn, a police officer near the scene told Reuters news agency, "Everything is collapsing."
French President Emmanuel Macron delayed a planned scheduled speech to the nation because of the fire. The speech was to present his answers to the yellow vest crisis that has taken over the country since November.
Macron arrived at the scene of the fire Monday night.
The cause of the fire was not immediately known. France 2 television reported that police were treating it as accidental.
Workers had been renovating parts of Notre-Dame. Parts of the monument were surrounded by a metal and wood support structure. The cathedral's bronze statues had been removed last week for repairs.
Notre-Dame's first stone was laid in 1163 by Pope Alexander III. Its main spire was added during repairs in the 19th century.
I'm Caty Weaver.

They set up a bronze statue to his memory.
他们立了一座铜像纪念他s%G=_f@r0Hjap;!xND。

When I reached the lakeshore, I found the opposite of a tourist site.
当我抵达湖岸时，发现自己完全不像是到了旅游景点dKbtCwVSANL,c*L9i)i。

Fires were burning out of control in the center of the city.
市中心的火势失去了控制e2a(iKvHPcibsH4j813t。

The doctor told him to stay away from fat food.
医生叫他不要吃高脂肪的食物!x,bINErIAB%AE。

5.Parts of the monument were surrounded by a metal and wood support structure.

6.The cathedral dates back to the 12th century. 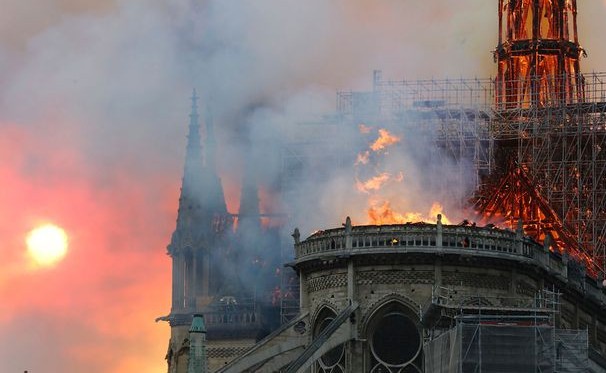