Diet Containing Lots of Eggs May Be Linked to Heart Disease
A new report links eating eggs to an increased risk of heart disease. The results follow several earlier studies that found eating eggs was generally healthy.
The JAMA Network Open published the new report in March. It combines data from six other earlier studies. It shows a 6 percent increased risk of heart disease when the average number of eggs a person ate each day increased by half an egg.
Norrina Allen, who co-wrote the report, is an associate professor of preventative medicine at Northwestern University's Feinberg School of Medicine in Chicago.
She told the Reuters news service that, in the United States, eggs are generally one of the top sources of cholesterol in a person's diet. Individuals with higher levels of cholesterol in their diet are at increased risk for the development of heart disease later in life, she said.
However, Allen added that she would not say that eggs are completely unhealthy.
"I'm not advocating people take them completely out of their diets," she said. "I'm just suggesting that people eat them in moderation."
Allen's team examined data gathered from six studies that involved a total of 29,615 people. Earlier researchers had followed these people for an average of 17.5 years. At the start, the people answered questions about the foods they ate. But they were not asked about their diets at any time after that.
Over time, there were 5,400 cardiovascular-related incidents among the group. This included 2,088 deadly and non-deadly heart disease events and 1,302 deadly and non-deadly stroke events. It also included 1,897 deadly and non-deadly heart failure events and 113 other deaths from cardiovascular disease.
After examining the data, Allen's team found a link between egg consumption as reported at the start of the study and people's risk of developing heart disease. As their egg consumption rose, so did their risk.
Some experts believe the new study does not prove that eggs were causing heart disease.
Cholesterol's role in the development of heart disease has been discussed for more than 30 years, said Dennis Bruemmer. He is a heart specialist with the Heart and Vascular Institute and an associate professor of medicine at the University of Pittsburgh Medical Center. Bruemmer noted that several past studies have tried to measure how much of the cholesterol in a person's overall diet comes from eggs. Each has produced different results.
"This study does have clear limitations, including self-reporting at a single time point," he added. "This limits its validity."
Eggs contain a lot of cholesterol - about 200 milligrams. That is the highest daily amount recommended under current guidelines.
Bruemmer said, "Eggs in moderation are probably acceptable from a nutritional standpoint." Moderation, he added, is "less than one egg a day on average, including eggs in foods such as bread."
Holly Andersen agrees that the study has "real limitations." She is a heart specialist and director of education at the Ronald O. Perelman Heart Institute at the New York-Presbyterian/Weill Cornell Medical Center.
One issue Andersen has with the study is that a lot of the egg-eating people in the study also appeared to be eating large amounts of meats and processed meats.
"If you're consuming a huge amount of processed meats, it doesn't matter how many eggs you're eating," Andersen said.
Also, Andersen said, the study is observational, meaning it can only show there is a link between egg consumption and heart disease. But it cannot prove eggs are the cause of the disease. It may just be that people eating a lot of eggs are also consuming a lot of bacon, Andersen said.
I'm Pete Musto.

When John was 17, he died of congenital heart disease.
约翰17岁时死于先天性心脏病;VUQ07svh1!S。

The marriage had lasted for less than two years.
这段婚姻维持了不到两年N_kn;mAP(Z(。

How much tax do they take out of your monthly pay?
他们从你的月薪中抽出多少税？

5."If you're consuming a huge amount of processed meats, it doesn't matter how many eggs you're eating," Andersen said.

6."If you're consuming a huge amount of processed meats, it doesn't matter how many eggs you're eating," Andersen said. 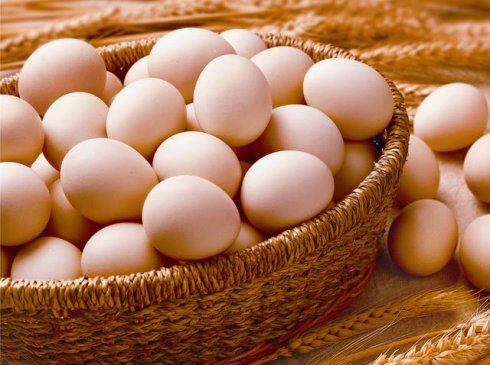