Murder Charge Dropped for Vietnamese Woman in Kim Jong Nam Killing
A Malaysian court has withdrawn murder charge against the only suspect still being held for the murder of a member of North Korea's ruling family.
The Vietnamese woman had faced a murder charge for the killing of the half-brother of North Korea's leader at Kuala Lumpur airport on February 13, 2017.
On Monday, Doan Thi Huong pleaded guilty to a less serious charge of causing injuring using a dangerous weapon. She is expected to be released in May.
The decision to drop the murder charge against the Vietnamese woman came three weeks after the court dropped a murder charge against an Indonesian suspect in the case. The Indonesian woman was released soon after.
The two were charged with involvement in killing Kim Jong Nam, the half-brother of North Korean leader Kim Jong Un.
The two women had been the only suspects held after four North Korean suspects fled Malaysia after the killing in 2017.
Oh Ei Sun is a senior fellow with the Singapore Institute of International Affairs. He said the decision not to charge the two women with murder was the end of the case because those responsible for the killing were hiding in North Korea.
Both women said they thought they were involved in a prank for a TV show. They said they did not know they would be involved in killing anyone.
The two were arrested and accused of placing a powerful poison called VX nerve agent on Kim Jong Nam's face.
Kim Jong Nam was the oldest son in the current generation of North Korea's ruling family. He had been living outside North Korea for several years. Some experts believe he represented a threat to Kim Jong Un's rule in North Korea.
Lawyers for the women have said they were used to carry out the killing by people with links to the North Korean Embassy in Kuala Lumpur. They also said government lawyers failed to show the women meant to kill Kim Jong Nam.
Malaysian officials have never officially accused North Korea of involvement.
The women could have faced death sentences if they were found guilty of murder.
Doan Thi Huong nodded in court Monday as the new charge was announced.
Oh said she placed the nerve poison on Kim's face, although she may not have meant to kill him.
The High Court Judge sentenced her to three years and four months in prison from the day she was arrested on February 15, 2017.
Her lawyer said she is expected to be freed in early May. Her sentence will be reduced by more than 30 percent for good behavior.
"I am happy," the 30-year-old Vietnamese woman told reporters as she left the courtroom.
The new charge could have led to 10 years in jail. The judge told her he wished her "all the best."
Vietnamese officials in the courtroom cheered when the decision was announced.
The change follows Malaysia's decision to drop the murder case against the Indonesian woman on March 11 after requests from Indonesia's government. Doan Thi Huong asked for the same treatment, but was told ‘no.'
The first charges in the case said that the two women worked with four North Koreans to murder Kim with VX nerve agent as he passed through the airport.
The Vietnamese woman's lawyer said she was not a "criminal." He said the four North Koreans were the real killers.
They used her "weakness," he said.
I'm Jonathan Evans.

In England the oldest son succeeds to his father's estate.
在英格兰，长子会继承父亲的产业4e@n0uT0T@aOYZQG(G。

We passed through miles of densely wooded country.
我们穿过好几英里茂密的林地JOU3_kM,NShDu+a[.m56。

They just need to be rewarded for their good behavior.
当他们表现良好时，他们需要的只是一些奖励jAtQnYg^;&W*8eURz。

The operator has to be able to carry out routine maintenance of the machine.
操作员必须能对机器进行日常维护AG+1^XZR_3c。

5.She is expected to be released in May.

The strike is expected to cause delays and disruption to flights from Britain.
预计罢工将导致英国航班的延误和中断Usubg~%;HyH]5gi。
This jury is expected to be sequestered for at least two months.
预计这个陪审团将至少被隔离两个月p],],WX;p&@p。

6.The judge told her he wished her "all the best."

wish sb all the best 祝某人一切顺利 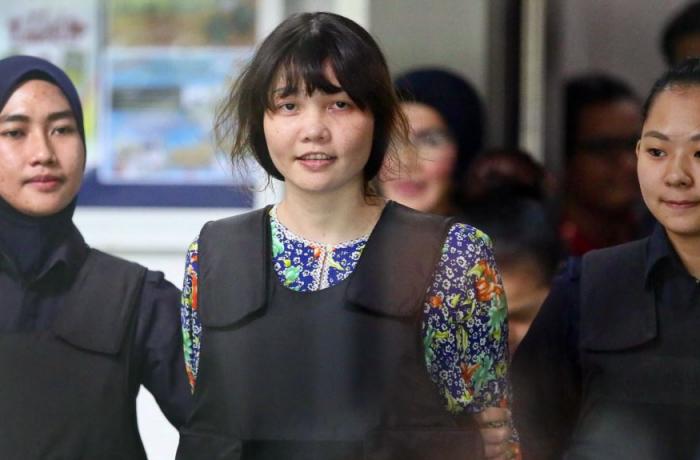