Dozens Killed in New Zealand Mosque Attacks
Dozens of people were killed Friday in mass shootings at two mosques in New Zealand. More than 40 others were injured.
One man was arrested and charged with murder in connection with the attacks, which happened in the city of Christchurch. Two other suspects were also being held.
Officials said that, as of Friday night, 49 people were confirmed dead. Health officials said at least 48 other people were being treated for gunshot wounds. Injuries ranged from minor to serious.
New Zealand Prime Minister Jacinda Ardern described the shootings as a terrorist attack. She said Friday was one of her country's "darkest days." Ardern said the government raised the national security threat level from low to high, the second-highest level.
By late Friday, officials had not named the suspect who was charged or the others being held. Police said none had been on any terrorist watch list. Police also said they had found explosive devices in a vehicle.
A man who claimed responsibility for the shootings left a 74-page anti-immigrant manifesto. In it, he identified himself as a 28-year-old white Australian. He used the term "white genocide." The term is often used by racist groups to describe the effects of immigration and the growth of minority populations. The manifesto cited white genocide as a motivation for the attacks.
The man who claimed responsibility wrote that he came to New Zealand only to plan and train for the shootings. He said he acted alone and that no group ordered the attacks. He said he chose New Zealand to show that even the most distant parts of the world were not free of "mass immigration."
Ardern told a news conference that many people affected by the shootings may have been migrants or refugees. "They have chosen to make New Zealand their home, and it is their home," she said. "They are us."
Ardern said of the suspects, "These are people who I would describe as having extremist views that have absolutely no place in New Zealand.
The gunman reportedly broadcast live footage of one of the attacks. The video shows him shooting for more than two minutes inside a mosque, the Associated Press reported. The gunman is shown taking repeated shots at people gathered to attend religious services.
The video continues as the shooter walks out of the mosque and onto the street, where he fires at people there, the AP reported. Later, he is shown going back into the mosque, where at least 20 people are seen lying on the ground. After walking outside again and shooting more, he gets into a car and drives away.
I'm Bryan Lynn.

Light gets into a room through the glass in the window.
光线透过窗玻璃照射到屋子里*x2wegiCE,ViTgo-5。

The lights are extinguished as soon as the news conference is over.
新闻发布会一结束，灯光就熄灭了9+SC5tdQk2-。

We heard him drive away.
我们听到他驱车离去了o_.s58mXKq。

5.One man was arrested and charged with murder in connection with the attacks, which happened in the city of Christchurch.

6.A man who claimed responsibility for the shootings left a 74-page anti-immigrant manifesto. 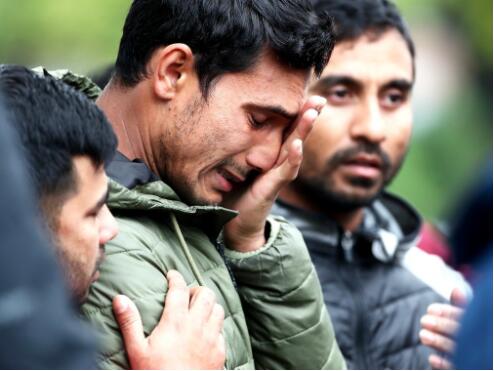