School Shooting in Brazil Leaves 10 Dead, Over 20 Injured
At least 10 people are dead after two young men attacked a public school in southern Brazil on Wednesday. More than 20 other people were reported injured.
The attackers targeted the Professor Raul Brasil state school in Suzano, near the city of Sao Paulo.
Reports say the shooting started at around 9:30 in the morning. One witness told the Globo Group that the gunmen acted during a break between classes, when many students were eating.
Globo said there was no information immediately available about the shooters' connection to the school or a reason for the attack.
Official records show that the school has 358 students in grades 6 through 9 and 693 students in grades 10 through 12.
By midday Wednesday, officials confirmed 10 people were killed. Sao Paulo Governor Joao Doria said the dead included six students and two teachers. The gunmen took their own lives, officials said.
Inside the school, police officials found a handgun and bottles that appeared to be Molotov cocktails, known as bottle bombs. Globo reported that a witness said he saw one of the attackers with a gun and the other with a knife.
Brazil, the biggest nation in Latin America, has the largest number of homicide deaths in the world each year. But school shootings are rare.
The attack comes after Brazilian President Jair Bolsonaro announced that the country's gun ownership controls would be eased.
I'm Jonathan Evans.

He transferred from the public school to the center.
他从公立学校转学到了中心SHApB-fAgss[|4I。

China has always been known as a land of propriety and righteousness.
中国从来以礼义之邦著称7BEGR*(I#]7KY。

The three victims from the Newark school shootings have been buried.
三名纽沃克校园枪击案的受害者昨天入土为安了tIF51pT%wl。

5.Brazil, the biggest nation in Latin America, has the largest number of homicide deaths in the world each year.

the largest number of 数量最多的

6.The gunmen took their own lives, officials said.

She was deserted by her lover, and in despair took her own life.
她遭人遗弃，一时想不开就自杀了IGNANefSIXeMXDlI[H。
Genuine depression was untreatable in the 19th century, and its victims often descended into madness or took their own lives.
在19世纪，真正的忧郁症是不治之症，患者经常发疯或自杀t)&CYoQ5lq36)ITqc。 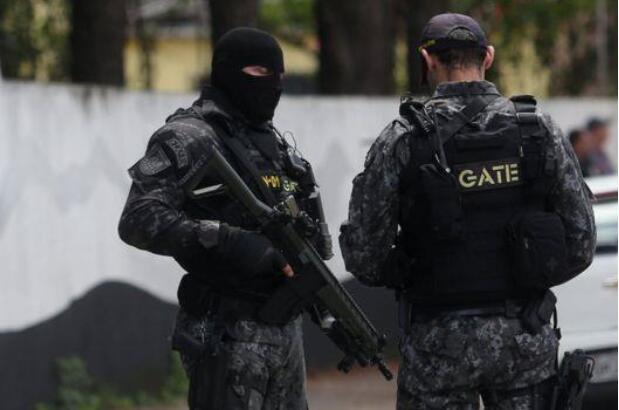