World’s Oldest Wild Bird Is a Mother Again
The oldest known wild bird in the world has become a mother again.
American wildlife officials said the egg of a Laysan albatross named Wisdom opened earlier this month. It happened at the Midway Atoll National Wildlife Refuge, northwest of Hawaii.
Wisdom is at least 68 years old and has raised at least 31 baby birds, or chicks. Wisdom was first identified as an adult in 1956.
Wisdom and her mate, Akeakamai, have been returning to the refuge to lay and hatch eggs since 2006. Laysan albatrosses mate for life. They lay one egg a year.
Beth Flint is a biologist with the U.S. Fish and Wildlife Service. She told the Honolulu Advertiser newspaper, "Wisdom is rewriting history about our understanding of survivorship, how long birds live, and how often they breed."
Midway Atoll National Wildlife Refuge is home to about 3 million seabirds, including around 1 million Laysen albatrosses.
The birds can also be found near Mexico and Japan. The albatrosses spend most of their lives flying over the ocean. They feed on squid and fish eggs. They can fly as far as 2,500 kilometers away from home to look for food. Biologists say they always return to the places of their birth to lay eggs and raise their young.
After an egg is laid, albatrosses take turns sitting on it to keep it warm. This lasts for about seven months. It is a process called incubating.
The young chicks fly out to sea about five months after they hatch.
Kelly Goodale is a biologist at the refuge. She says Midway Atoll contains "countless generations and families of albatrosses."
She says that when Wisdom returns to the refuge, she is "surrounded by what were once her chicks and potentially their chicks."
I'm Ashley Thompson.

He's been away for at least a week.
他走了总有一个星期吧p&(bA_oJ%v=0wLyXM。

He dived into the water to look for the dead body.
他潜入水底找寻尸首JjxLM[VIGDe8C。

I'll keep you company as far as the station.
我将与你结伴到车站Gu*]ok1456p)q。

To keep warm they burnt wood in a rusty oil barrel.
他们在一只生锈的油桶里烧木柴来保暖nx#[PSHi2xqMj*l7Voz。

5.After an egg is laid, albatrosses take turns sitting on it to keep it warm.

6.She says that when Wisdom returns to the refuge, she is "surrounded by what were once her chicks and potentially their chicks."

He was surrounded by people, all with claims on his attention.
他被人们团团围住，个个都要他把注意力放在自己身上nX6Dcd588~alKSHG。
Maybe you had visions of being surrounded by happy, smiling children.
也许你曾幻想过被快乐嬉笑的孩子所包围的情景.s)~Ohiy!FL;em&iD*B。 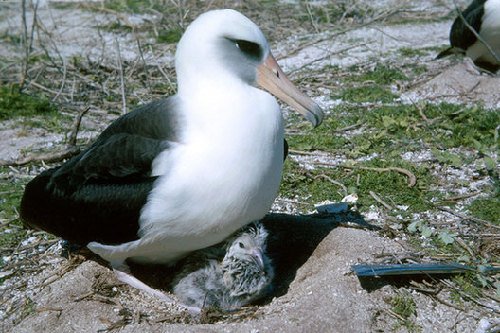